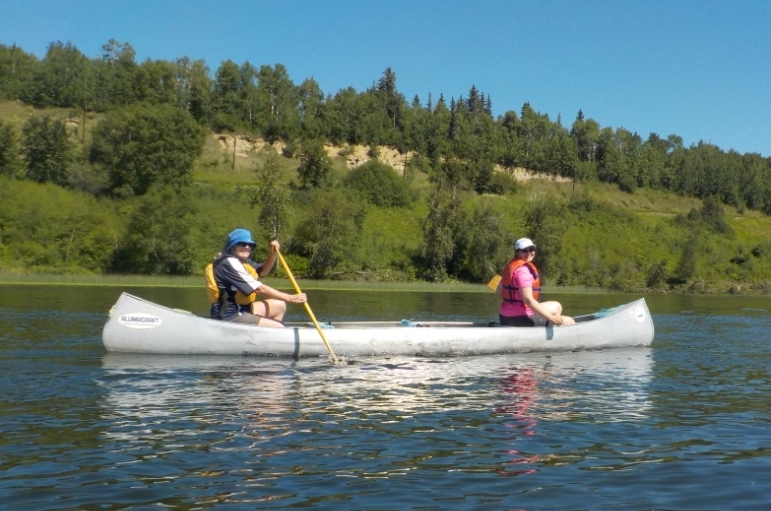 Every sea-faring yarn needs a good opening line. It was a sunny, calm day might not draw in the readers but it was a completely accurate for this day trip on Wabamun Lake. The trip was from Seba Beach to Wabamun over a distance 22 km.

During the off-season, I had found that not many in the club had paddled on Wabamun before so it would be an new experience for all of.

On the trip were:

After a very short shuttle, we launched from Seba Beach 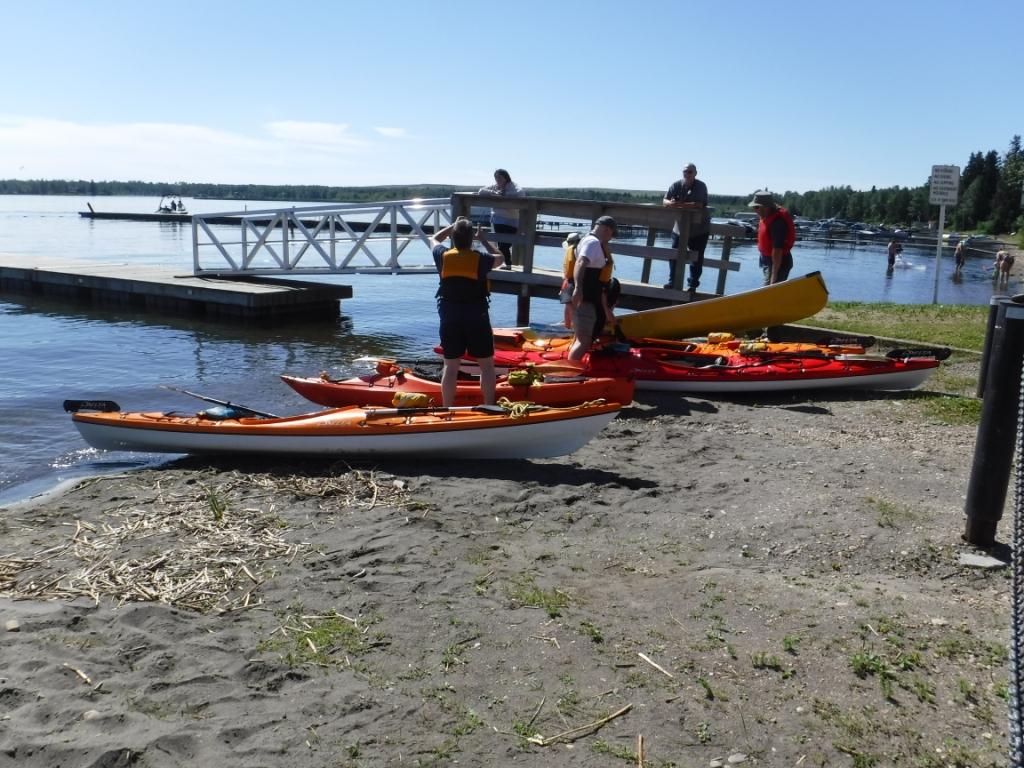 and headed along the west and north shores. 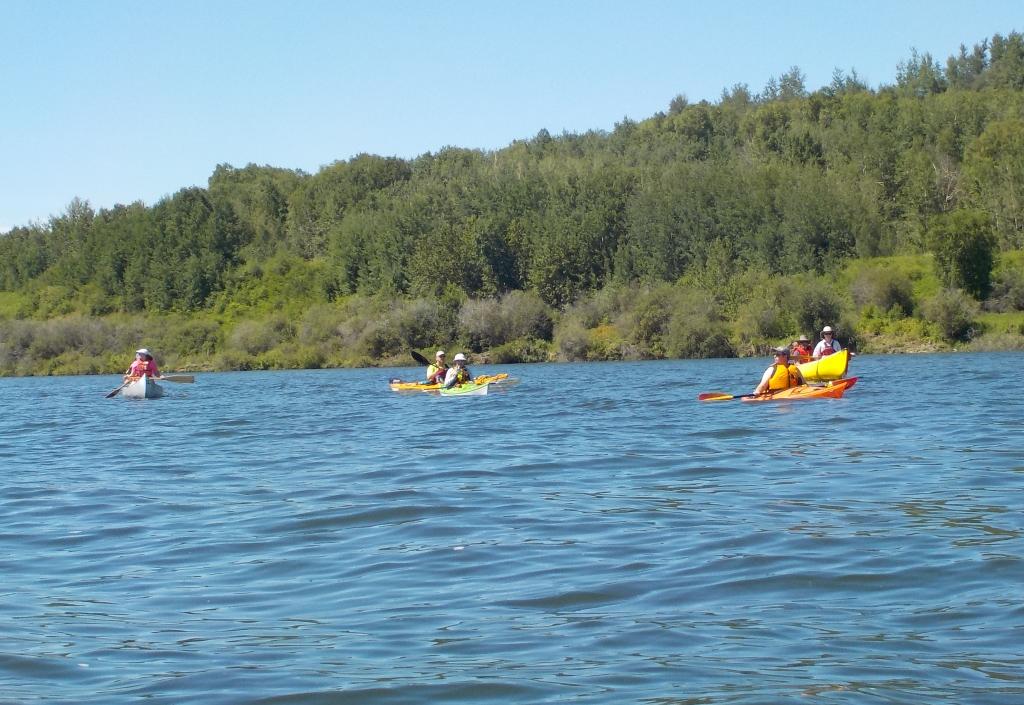 There were shoreline cabins of all shapes and sizes from some not much bigger than your typical garden shed to those rivaling some of the biggest houses in the city. As it was a beautiful weekend, there was a lot of boat traffic on the water including fisherman in small aluminum out-board driven boats to two engine pontoon boats as big as your backyard.  We were glad to see that all boaters were very responsible and stayed away from our flotilla. The water quality wasn’t perfect as there was a fair amount of what I would call plankton (probably not technically accurate) in the water but you could still see a fair distance underwater.  What was most surprising was the sandy bottom.  In many places along the north shore there are some nice sandy beaches and shoals where we saw people escaping the heat of what was becoming one of the warmest days of the year.  Options for a shady lunch spot were not plentiful but we found a nice beach with some trees at the edge near Fallis.  We may have been on someone’s driveway but we practiced leave no trace lunching.  On that note, if you do paddle Wabamun, be aware that some properties may extend right to the water or some property owners may think theirs does. It’s always best to ask if it’s OK to stop if there is someone nearby and by apologetic if you find you have stopped on someone’s property.

After lunch, we headed on-wards.  Mike felt that a practice roll was a good way to cool off. Sadly, all he could complete was a bottom roll but the cooling objective was reached. As we paddled on, we wondered about where the train derailment and bunker fuel spill has occurred.  At our mid afternoon break stop, we pulled up on shore next to the train tracks (always use caution if you cross these tracks as there was a train every ten minutes or so) and got out to stretch our legs in the shade. The owner of the property across the tracks stopped by to check what we were doing as there had been some partyers leaving a mess around.  When we explained we were a local paddle club just stretching our legs they were quite talkative and as it turned out, we were standing exactly where the derailment had occurred although no evidence could be seen of it.

With the day starting to get into late afternoon and still 9 km more to go, we set off and continued on to Wabamun and the take-out.  This is a very popular beach area although the bottom is more mud than sand so there was mostly murky water where we pulled out.

As we got closer to Wabamun, the cabin density increased and so did the docks.  Some elaborate 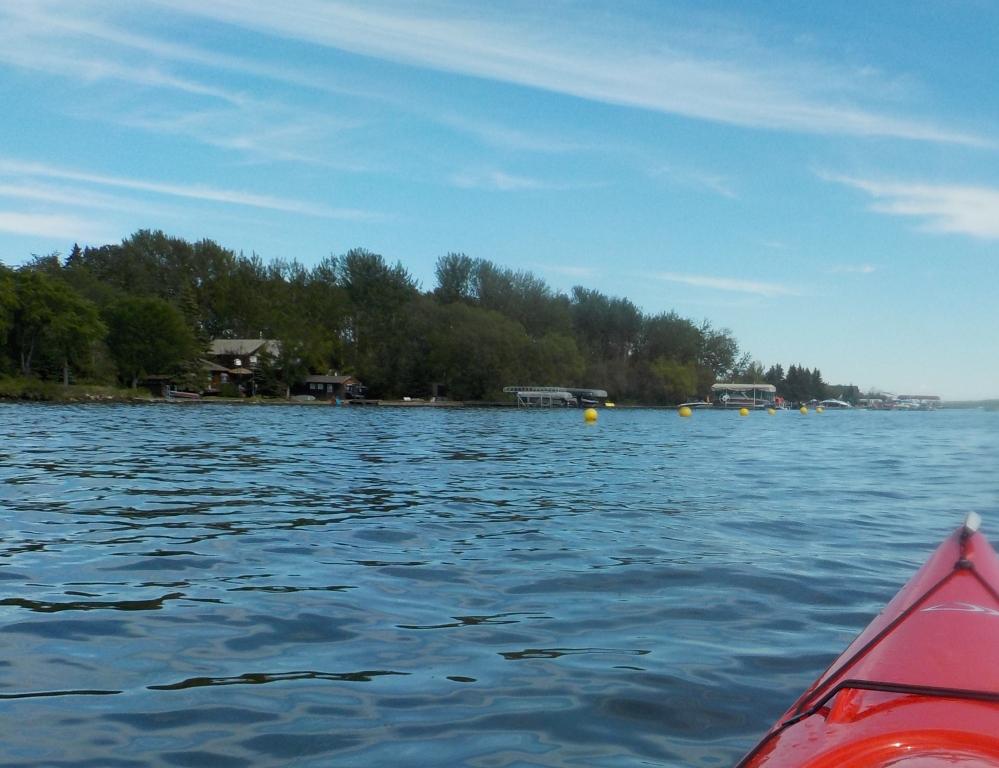 and some simple but well identified moorings. 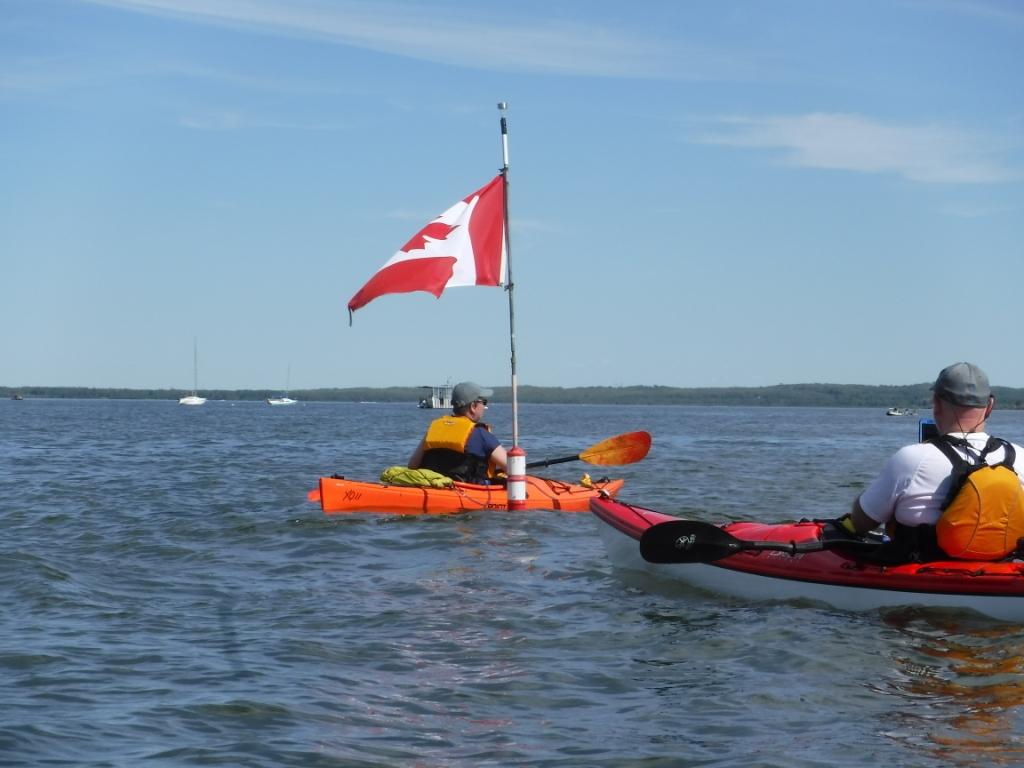 It was a wonderful paddle but after 22km in the high temperatures, we were all spent. Some of us headed back home while a few dredged up the energy to crawl up the street to the local ice cream stand.  A cold refreshing treat in the shade can really energize you!

Thanks to Tom for the great photos!