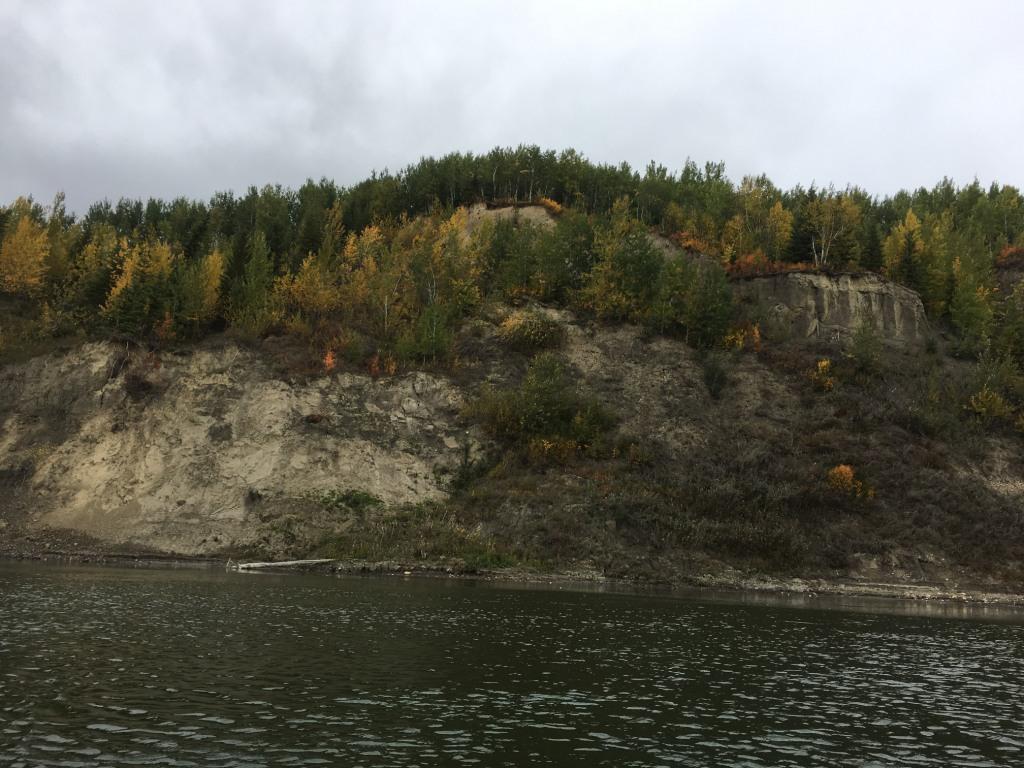 With a bleak forecast that slowly improved day by day as the weekend approached, 8 paddlers met in Blue Ridge with hopes of gathering enough excitement to brave the elements and take a two day trip on a delightful section of the Athabasca River.

Monday, coffee in hand, looking out on the rain morning…happy enough to be inside at home instead of packing wet tent and gear…

Saturday, eight of us stood in the rain outside Blue Ridge Hotel trying to work up enthusiasm for two possibly wet and cloudy days on the river. Nobody wanted to be the first to say “Cancel.” The ‘Go’ decision was clinched when Stephanie said the hard work – packing, planning etc – was already behind us so we owed it to ourselves to carry on.

And so – on the bridge to unload. Other folks there in the rain included: another canoe-kayak group making the Ft Assiniboine trip, a solo tripper sheltering under a tarp waiting for his pick-up after finishing his trip, and a number of fishing people.

Then the shuttle set up with all cars going to Ft Assiniboine for the take out and a couple used to bring the drivers back to Blue Ridge bridge to get on with the trip. The mood was not outright pessimism but rain all the way in both directions was discouraging. 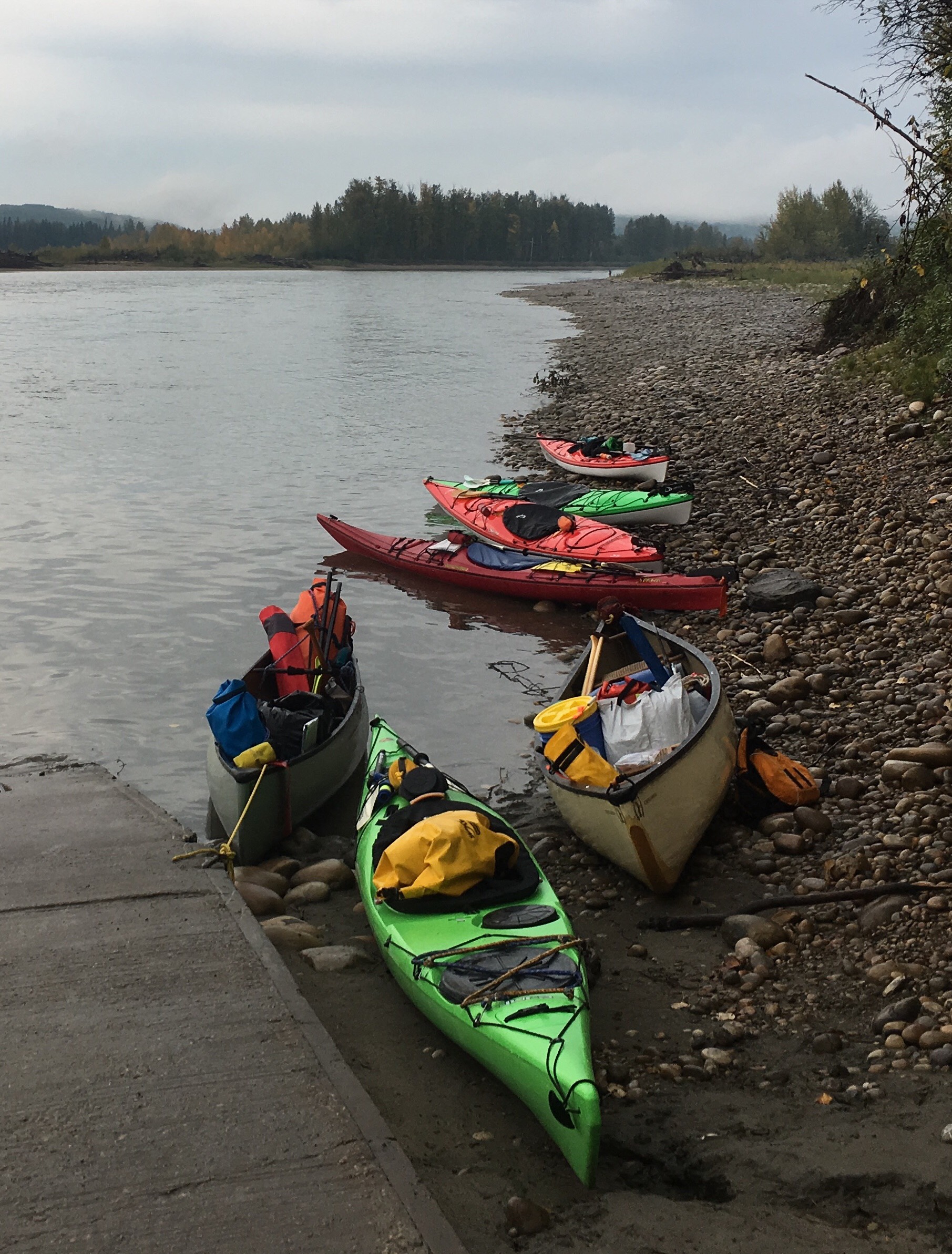 Back at the bridge the rain let up and the sky brightened a bit and we felt quite positive as we set off, 7 boats in all: one tandem canoe, one solo canoe and five solo kayaks. As always it took me a little while to adjust to the river and get into the habit of scanning ahead for the channels, routes and currents in a river made up of gravel bars and islands. An amusing example of not looking ahead was at our lunch stop where we realized that we were ‘trapped’ in a U-shaped gravel-bar-basin; but we found a slightly deeper spot and although several boats probably did some bumping over the rocks only one boat got stuck on the bar briefly. Less hassle than the swarms of friendly wasps that wanted a share of our lunches.

The weather steadily improved and soon was warm and sunny. 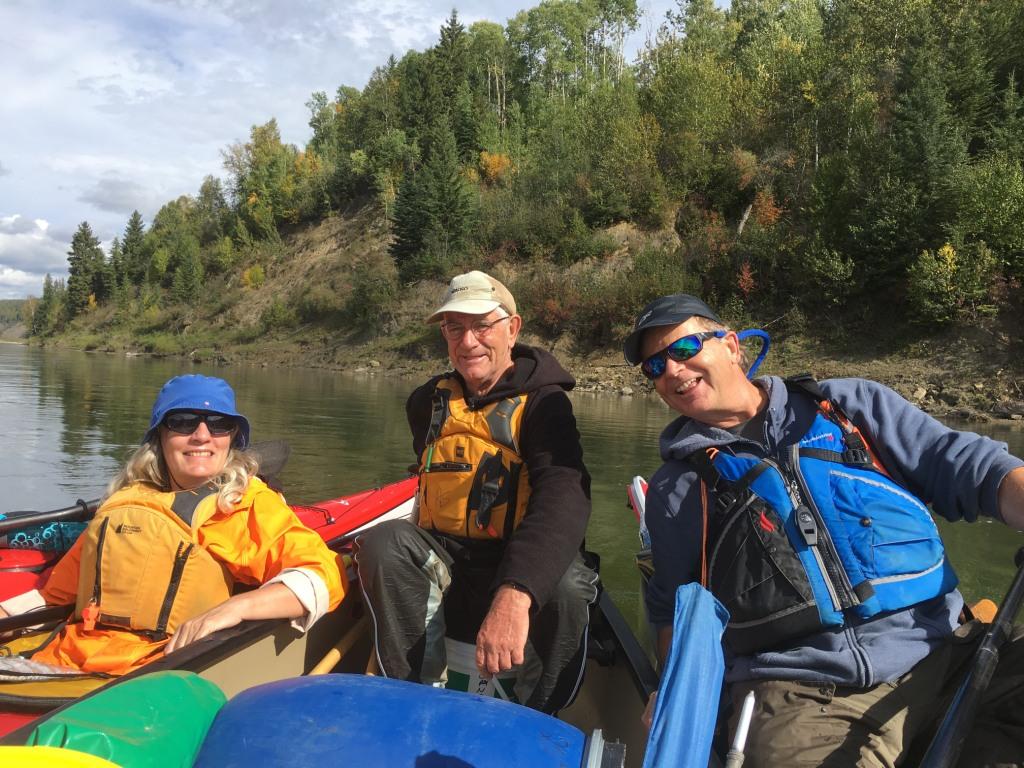 Steady progress all afternoon paddling through a chain of islands that characterize this stretch of the river. At one point we sighted the other paddle group and were surprised to have caught up with them, but we lost them again as we probably went down opposite sides of an island. At about that time we stopped briefly to put out a campfire left burning on the beach; despite the earlier rain, it seemed totally irresponsible of someone to have left it burning, especially with reminders like ongoing BC fires and the recent smoky-air-norm in AB.

At the bottom end of Five Mile Island we were blasted head on by very strong wind and paddled hard mostly to keep the boat from being blown about. Once around the bend the wind let up and we started looking for a camping place…soon finding a great little grassy meadow among the trees on river left. Lovely warm evening with good company around the stoves and suppers, exchanging camping tips and other stories. 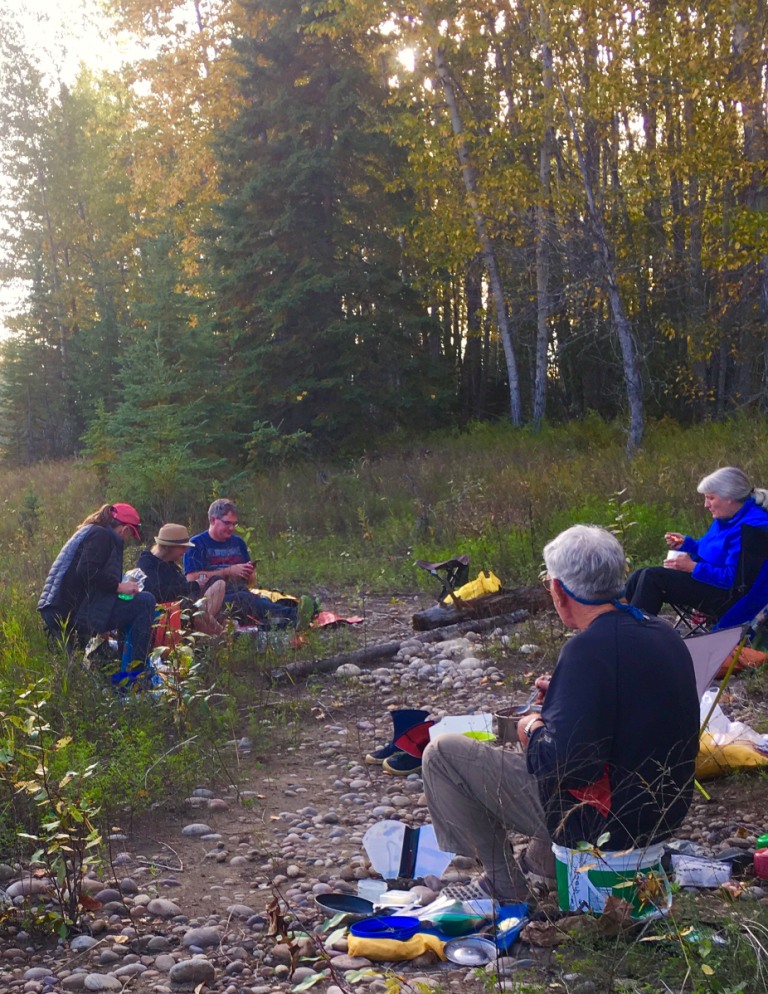 Sunday morning was clear, warm and a complete contrast to the previous morning. Spirits were great and we got on the river by about 9.30 or 10.00.  On this 2nd half of the trip the river has fewer islands and is wider, almost lake-like in places, although there is still a good current. Fall colours are developing nicely, with yellows starting in the trees and orangy-reds in the undergrowth. Shortly after starting we disturbed a pair of pelicans that cruised off long before we got close. Other wildlife sightings included deer, a couple of far-off beavers (but frequent bank beaver-lodges), hawks, eagles and a variety of smaller birds such as kingfishers. We were undecided whether cattle were wild-tamelife or tame-wildlife. At our lunch spot on day-2 someone found the carcass of an immature eagle on trail in the bush, giving rise to the ‘who (or what) done it’ mystery of the trip. 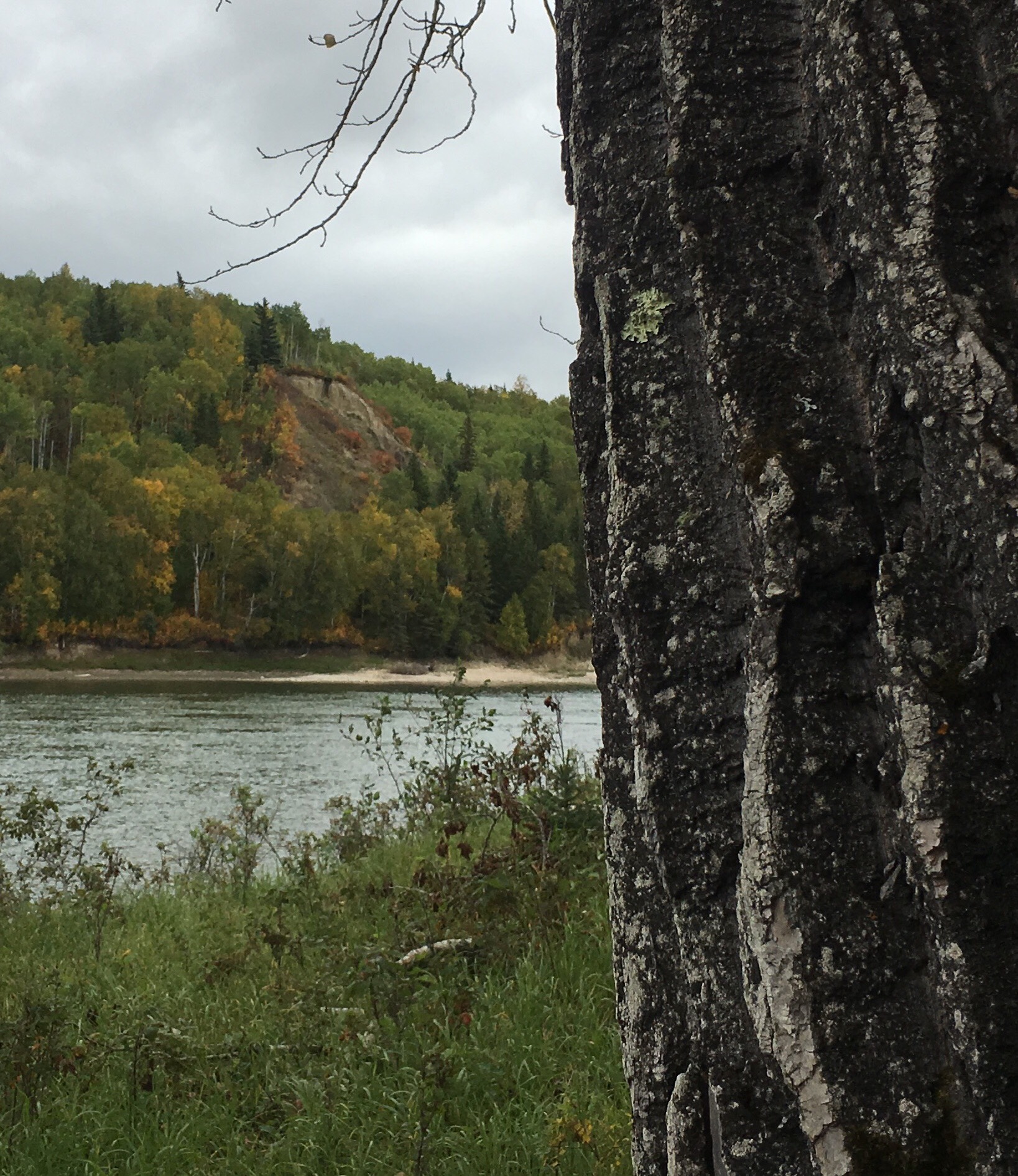 The sunny Sunday morning morphed into a comfortable but mainly cloudy day and frequently we had to paddle into strong headwinds. During the day we were passed by two or three power boats. Near noon we passed the other paddle group who were lunching on the bank. After our own lunch we launched just as they were passing and then carried on ahead of them. They were probably intentionally slower as one of their number was in a play-boat and probably more dependent on current than paddling for progress. Perhaps near 4.00pm we arrived at the bridge and pulled out on river left just below the bridge. It is a good eddy but a steep, stony shore and a steep bank that boats had to be hauled up. The next hassle was that the easy car access parallel to the road was no longer available. However there is vehicle  a track under the bridge from the park on the other side of the road- the only catch was a car with boat on top couldn’t fit under the bridge to get out again.  So boats were carried around while cars were retrieved and loaded before we drove off  ‘into the sunset’.

Thus ended a delightful trip with unexpectedly good weather despite a doubtful start; perhaps there is a moral…? Or maybe we just lucked out!

Access at the Blue Ridge bridge is on river-right on the downstream side of the bridge. There is a concrete boat launch and ample riverbank for canoe and kayak launching.

Camping possible in the bridge area. I think it is random camping.

Camping is wherever you find a good spot. Most of the trip is through ‘wild’ river valley. There is pastureland, mostly on river right, over a 10km stretch starting from near the bottom end of Five Mile Island.

Take-out options at Fort Assiniboine include:

-There is a marina in Fort Assiniboine about 1km below the bridge. Haven’t investigated but it is most likely the best option.

-River right at the bridge is a long wide gravel beach on an inside bend. Looks like there is easy access for cars. Probable second-best option.

-River left just below the bridge, the take out we used with limitations as described. Maybe third-best option.