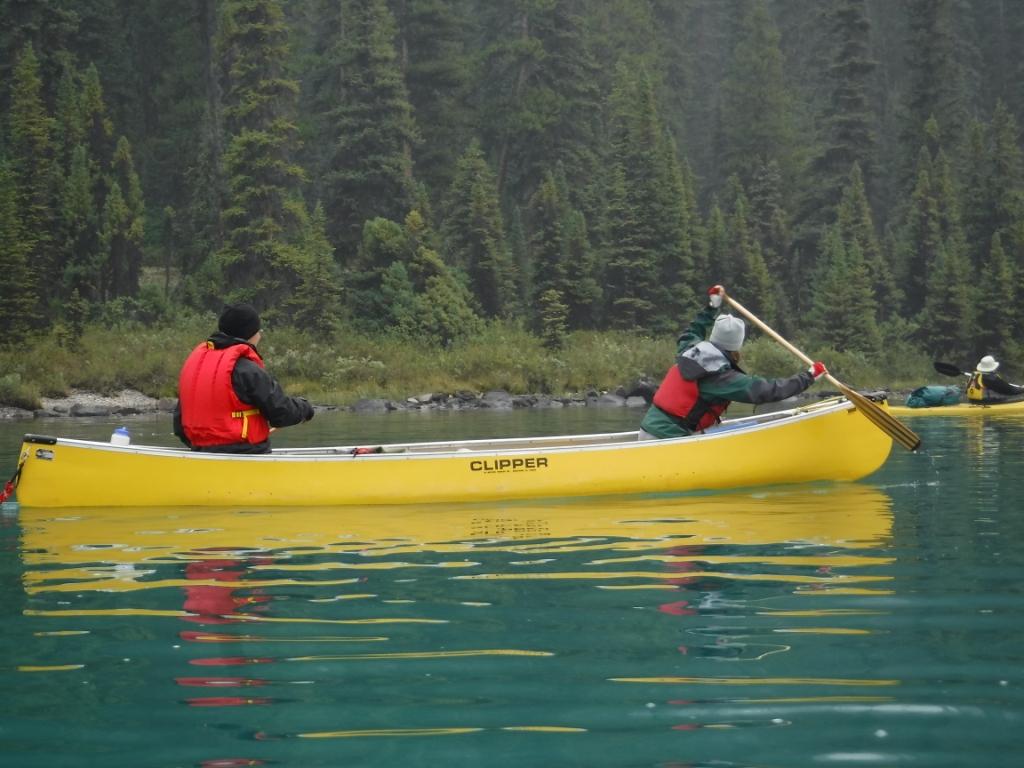 Another one of our car camping trips, this time to the majestic mountain lakes of Jasper.  The itinerary included Maligne and Pyramid Lakes.

Our merry group was made up of:

We all met at the Marmot Meadows group camping area of the Whistlers Campground on Friday evening.  This is a large grassy field on the south side of Whistlers with two cook shelters and a heated washroom building with hot and cold running water.  It can be booked for tenting groups of 15 to 150 people.

Being this close to a town, some of the group decided to forego eating supper at camp fter we set up and went to L&W pizza for supper.

With a good weather forecast for Saturday, everyone was looking forward to launching on Maligne Lake.  What couldn’t be planned for was the smoke from the BC fires, while it didn’t cause any respiratory issues, we woke Saturday to smoke so thick we couldn’t see the Skytram terminal on the top of the mountain next to our camp.  Not to be deterred, we drove to Maligne Lake boat launch and by 10:00 AM we were on the water.  Sadly, the anticipated mountain vistas were absent on this trip. 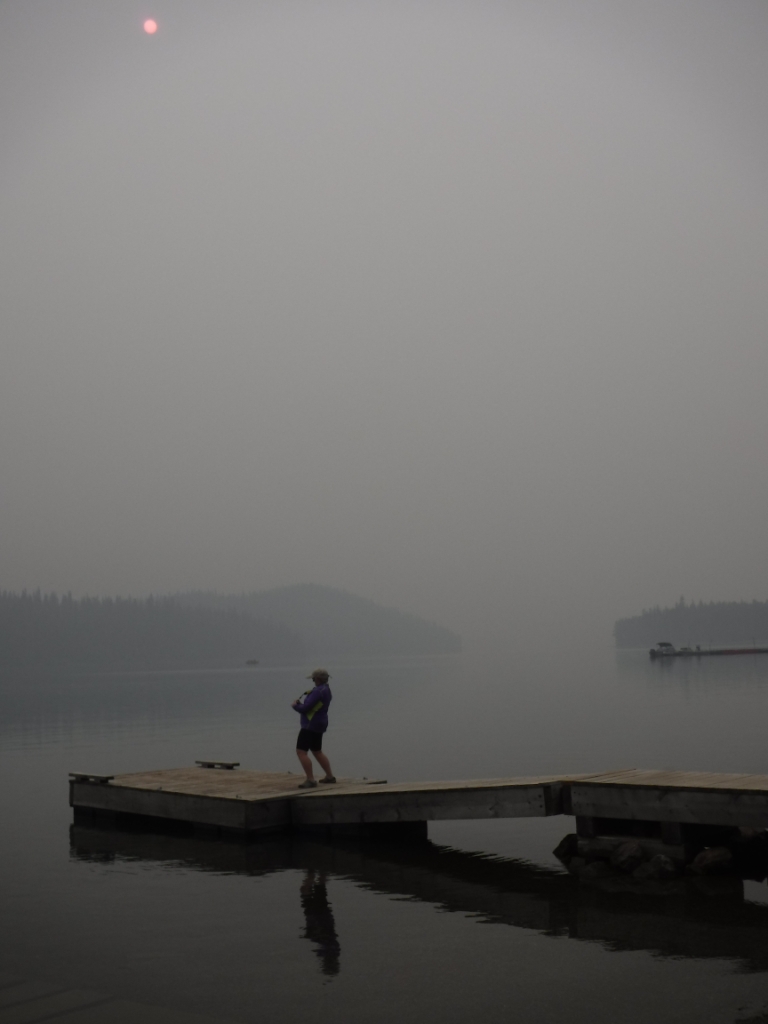 We paddled to the east side of the lake and started heading south.  It was somewhat surreal as we couldn’t see much but the near shore. The far side of the lake, while on a kilometre away, could have been across the sea. The plan was to see where we got to in 2.5 - 3 hours then stop for lunch and head back. On our way down we saw and felt the Spirit Island tour boats on their relentless circuits. 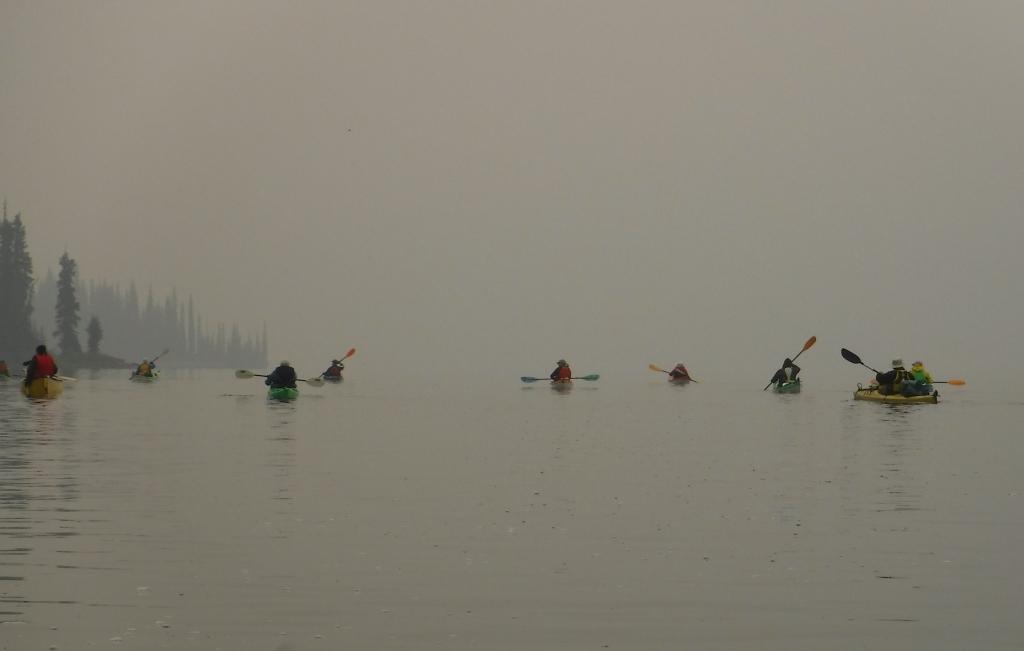 With one rest stopped, we landed at the Samson Picnic site at 1:00pm set up lunch. This was also an opportunity for some to have their first “green throne” experience.  While minimal, they are a welcome option to the rustic alternative.  After lunch we started to retrace our path and as expected, the afternoon winds picked up and we had to bear down to punch through.  We made a couple of rest stops yet we still made very decent progress and everyone handled the wind and swell admirably. Thankfully the wind died down at about 3:30pm so we could finish the day on an easier note.  We paddled up to where the lake narrows then paddled across to the west shore at the Hidden Cove camp area to see some new scenery.  Finally at 5:00pm, we landed back at the launch tired and hungry. For some, this was the longest they had ever paddled and some challenging conditions but everyone did fantastic. Some of the group headed back to camp while the rest decided that supper in town was called for again followed by ice cream.

Back at camp after supper, we sat around the fire and chatted about the day as well as sang campfire songs (not really but thanks to Tom’s idea we all know what each of our nicknames is now)

Well what a difference a day makes on many fronts. We woke to a moderate layer of frost everywhere.  The forecast low of 7C was a little bit off with the temperature flitting just above 0C.  A few were a little on the chilled side but glad we brought gloves and toques.  We lit a fire for people to warm up as they had breakfast.  The good news was the weather change also cleared the smoke out appreciably so we knew we would have more to see on the paddle around Pyramid Lake. After breakfast we headed to Pyramid Beach to gear up.  The sun was shining and only a trace of smoke was in the air. 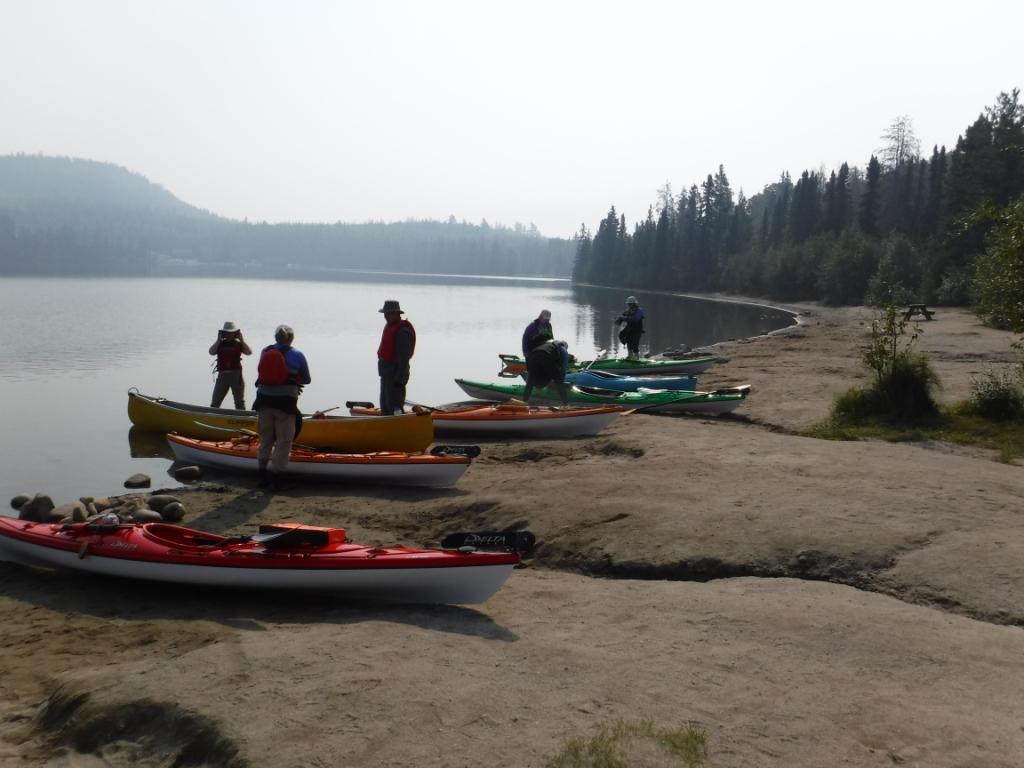 As we were getting ready, Isobel asked if we could practice with our throw bags so a few of us practiced throwing and recoiling. It is not as easy as it sounds but after a couple tries everyone had a good idea on what to do.

On the water we started a slow clockwise tour of the lake.  The water was crystal clear and quite clean. Pyramid Mountain and others around the lake were a bit hazy but at least visible. 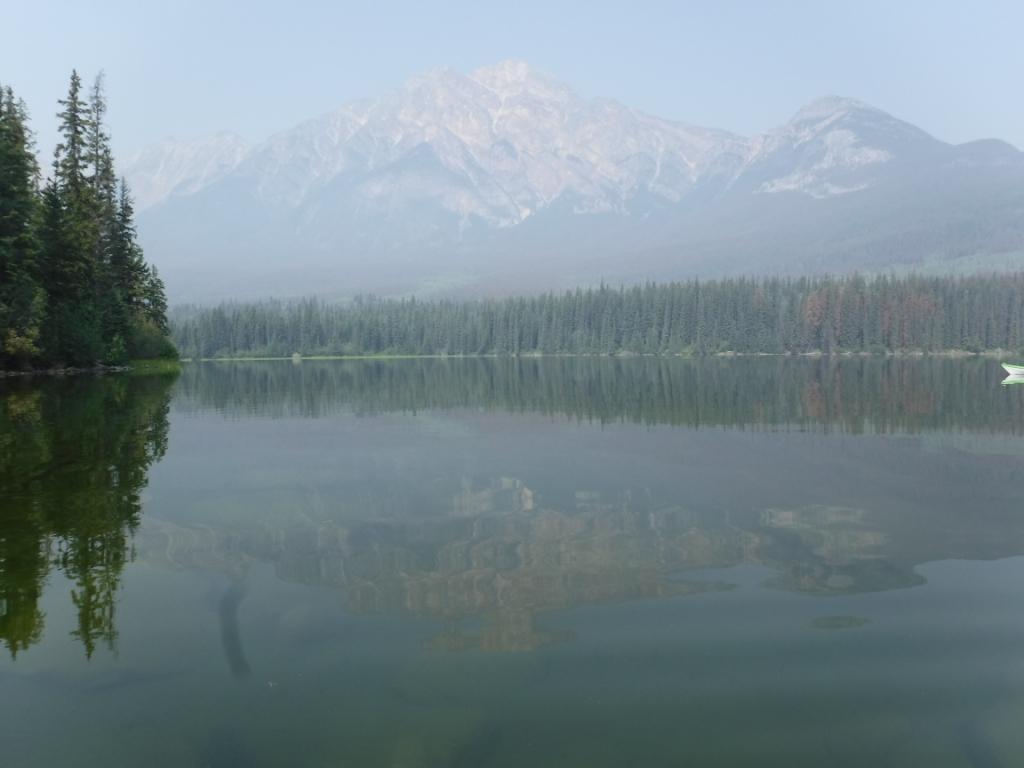 As lunch approached, we looked for a place to land.  We had hoped to stop on the island but we couldn’t see a good spot to safely get out of our boats. Back on the east side of the bridge to the island, we found a good spot.  As we sat and enjoyed the sun and our lunches, we talked about how nice the day was and how it would have been nice to have the clear views for Maligne.  After lunch we returned to the put-in. Alas, I wish we could have better conditions. To mix metaphors, if wishes were nickels, five will get you ten that the NWV go back to Maligne on a future trip.