Well it seemed like a good idea: Get out of the city for an easy day paddle in the Blackfoot Recreation Area, and then use the fire pits and picnic tables at the Islet Lake Staging Area for an afternoon barbecue. For me, it started off well, but at some point east of Highway 21, I realized that I had forgotten to pack my kayak spray skirt. Oh, well … it’s an easy paddle on flat water, so no problem. Then, the sudden thought that my spray skirt was clipped onto my PFD, which was also missing. Well, that can’t be: an NWV trip leader paddling without a PFD. So, I turned the car around and found a safe place to pull over and make a call. Fortunately, Alan answered and agreed to lead the others whilst I ferried back to my place to pick up the missing items.

When I finally dipped my paddle in the water, the others had just completed a thorough tour and inspection of the south bay of the lake, passing by the cottages of Islet Lake Estates. Most of the crew (Stephanie, Rob, Martine and Alan) were familiar from Alan’s trip near Genessee the week before, while Paul and Cathy were new friends to me. We paddled through the notch at the north end of the large island and stopped along the northwest edge for Alan to go in search of garter snakes, where he suspected they had a hibernaculum. No live snakes were found, but he proudly hoisted two carcasses into the air to show that they had been there.

At the northeast end of the lake, where the shelter is visible along the Push Lake trail, we ruminated about loon nests and drowned trees on the small island – or at least people pretended to listen to me. The far north end was becoming choked with aquatic vegetation, so we turned around and made our way back along the west side. 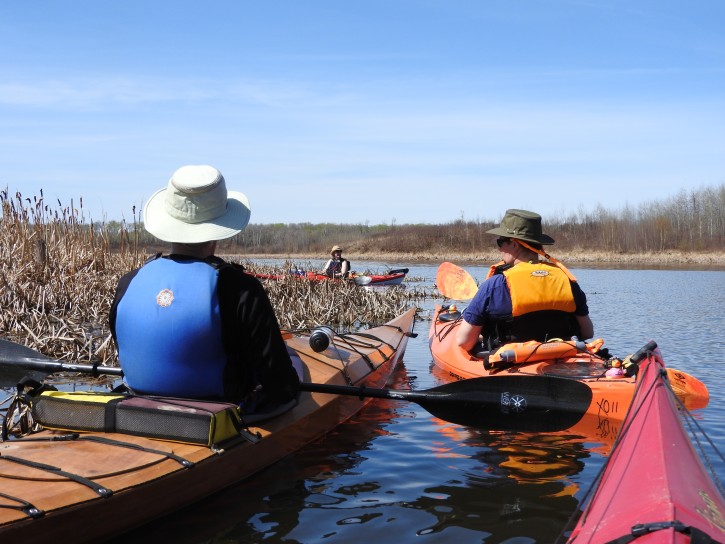 In our circumnavigation, we saw several ducks, grebes, gulls and at least one loon. And finally a garter snake, swimming across the south bay, which Stephanie captured on video.

The weather was ideal for a picnic—and no ants. As we came back to our launch, a few people remarked that there seemed to be more leaves on the trees than when we had started a few hours earlier. Indeed, the temperature topped 23 C, and the wind was light from the south. As this was the warmest day since last October, we really were on the cusp of summer. Thus, we made a fire and shared some food. Martine’s mushrooms were a real hit. 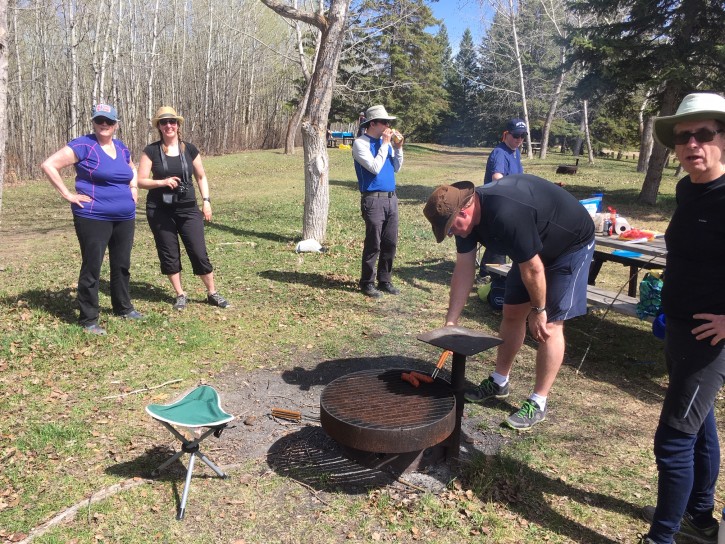 So it was a good idea! Thanks to a great crew for a wonderful day!