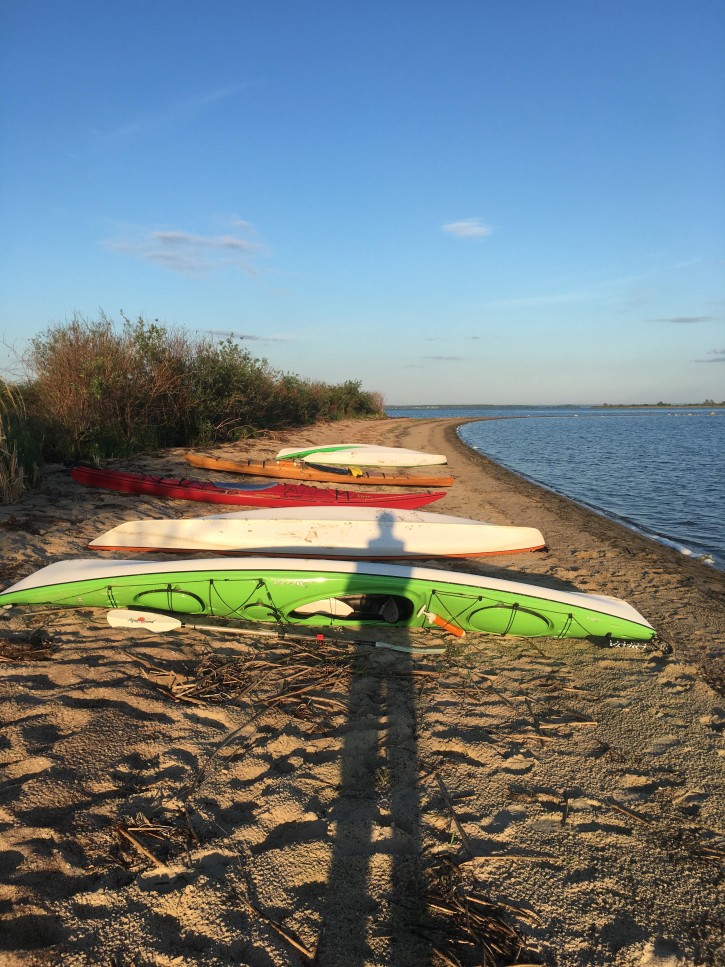 We wanted to camp on a sandy beach on a big lake. So, we headed to Lac La Biche, about a 2.5-hr drive northeast of Edmonton.

We had agreed to meet at Day Use Beach in Sir Winston Churchill Provincial Park about 4 PM with an expected launch to our campsite at 6 PM. Like clockwork, our five vehicles came into the parking lot one behind the other. Upon registering at the campground office, we were directed to the official boat launch along the causeway from where we could leave our vehicles and launch our boats. That was different from the last time I was here, when we were allowed to park and set out from the Pelican Islands viewpoint. It meant a longer trip to our campsite, and a bit of jostling with mega boats being towed by mega trucks at the boat launch.

The afternoon was pleasant with only a slight whiff of rain in the air. We were indeed ready to set out early when a sudden on-shore wind picked up and soon had nasty chop with whitecaps lapping at our feet. Even a big motorboat scurried up the ramp to wait out the squall. Our timing was good, though: had we been 15 minutes earlier, we would have been bucking a headwind with heavy showers and rough water. So, after the storm abated, we were off at 6:30, not far behind schedule. 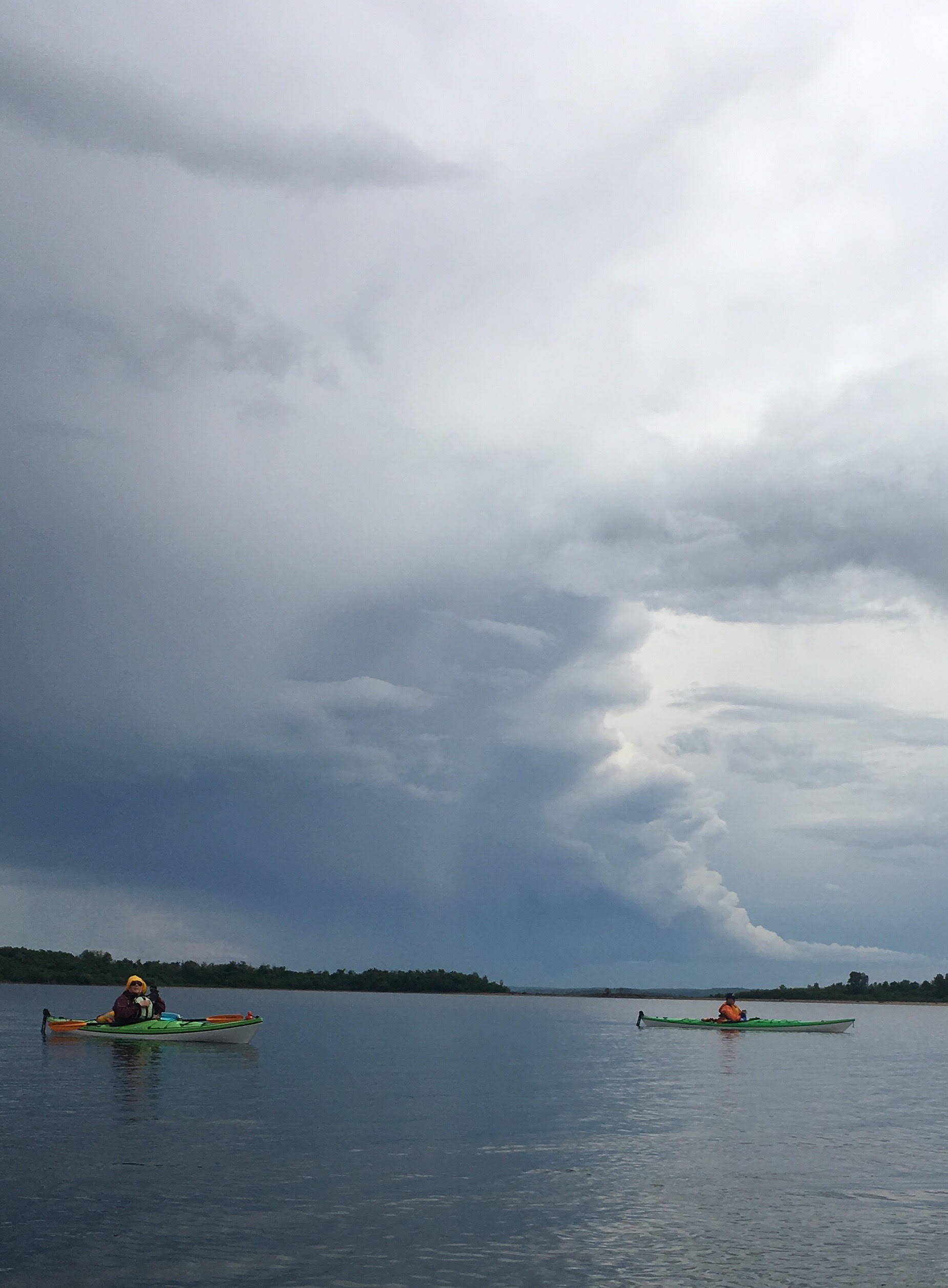 Once on the becalmed water, we made our way to Birch Island, taking much more time than originally expected, in part because it’s hard to decipher exactly where to go at water level from an unintended starting point (and without a GPS waypoint ). But, our troupers finally arrived at the designated campsite in time to set up our six tents and make supper before dark. (Mind you, at this latitude one week before the solstice, we certainly had lots of daylight to play with.) The site was a bit stony, and it seemed that the lop-sided picnic table and hearth fireplace had come from Game of Thrones, but it was a welcome camp. Some women were even known to party on the beach until after midnight, complete with wine, lounge chairs and an LED mood light. The day ended nicely. 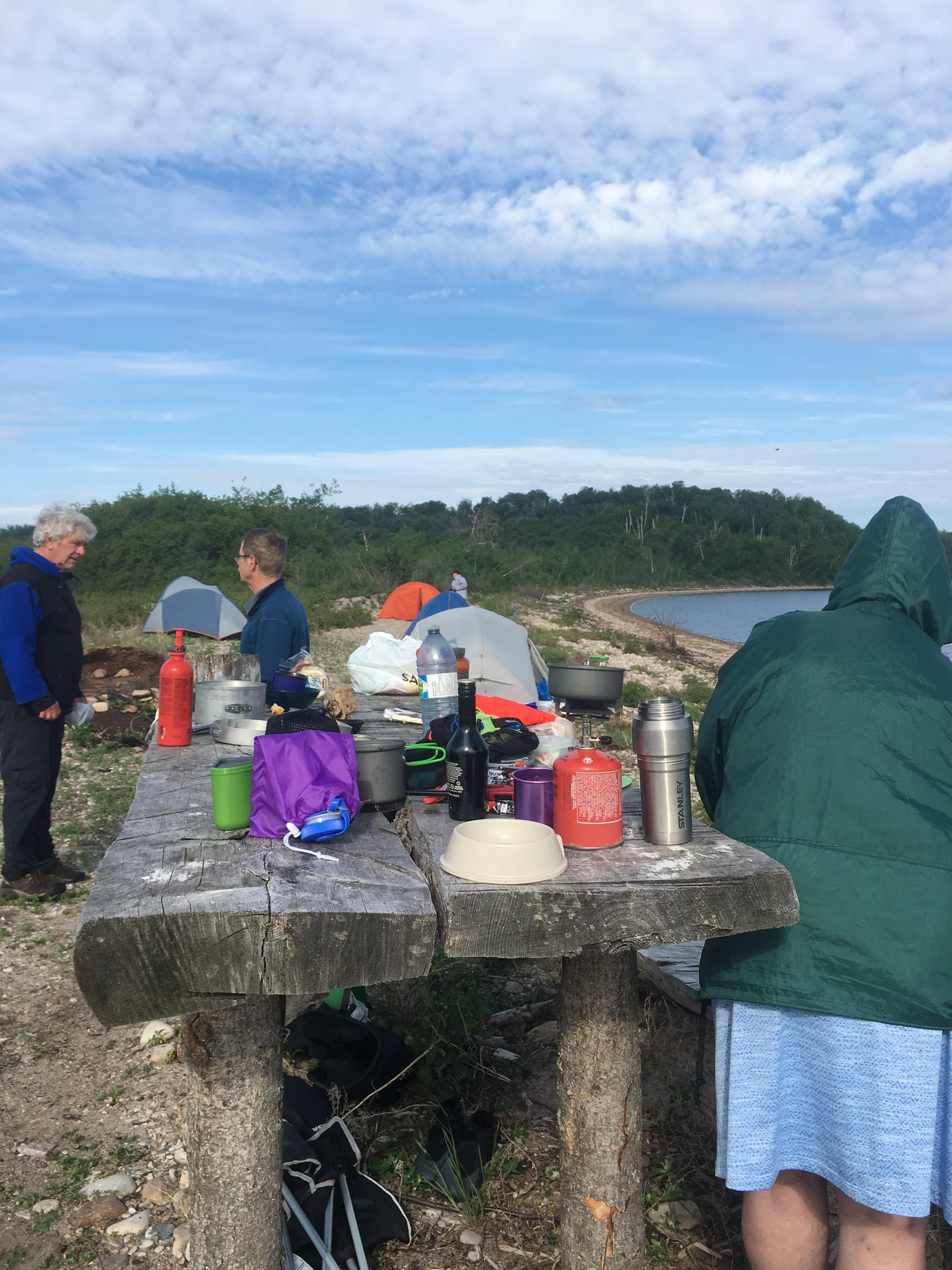 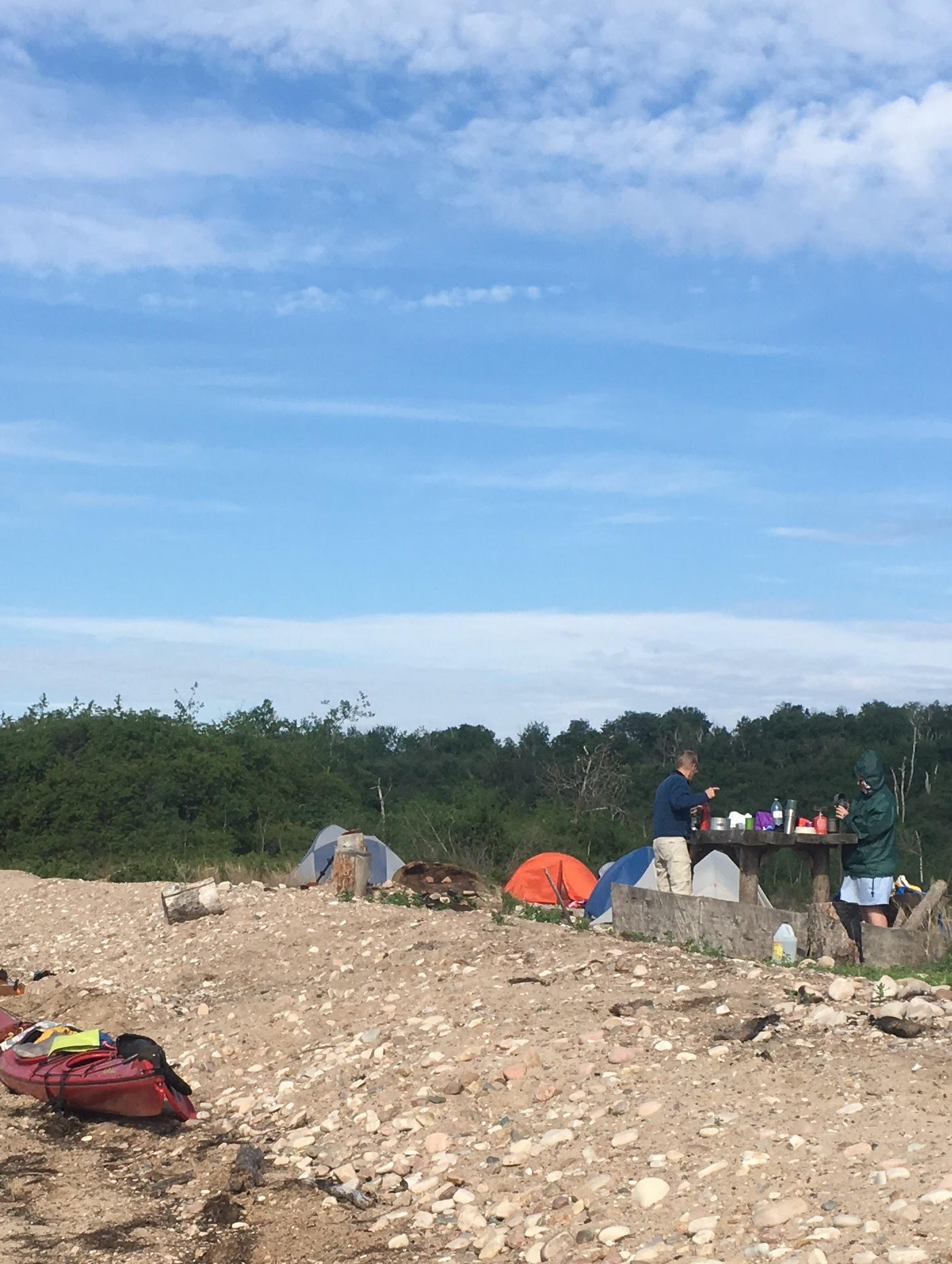 Our site on the spit of Birch Island had no large trees or spots for shelter, so after breakfast, we paddled to Currant Island to have a look-see. We found a wonderful beach with adequate trees for hanging tarps—exactly the spot where Gord, Werner, Alan and I had camped in 2016. So, back to our first camp we went to get our gear. During the move, we endured one quick thunderstorm, but soon had a comfy campsite with lots of room for our tents and a good dining area.

In the afternoon, we circumnavigated Currant Island, but not before another squall had us beat a hasty retreat to our shelters just as we were about to launch. Visions of yesterday! The evening found us relaxing after supper in good weather before tucking in early for a good rest. And even though the breeze died off, there was nary a mosquito to be found amongst the aspens and willows. 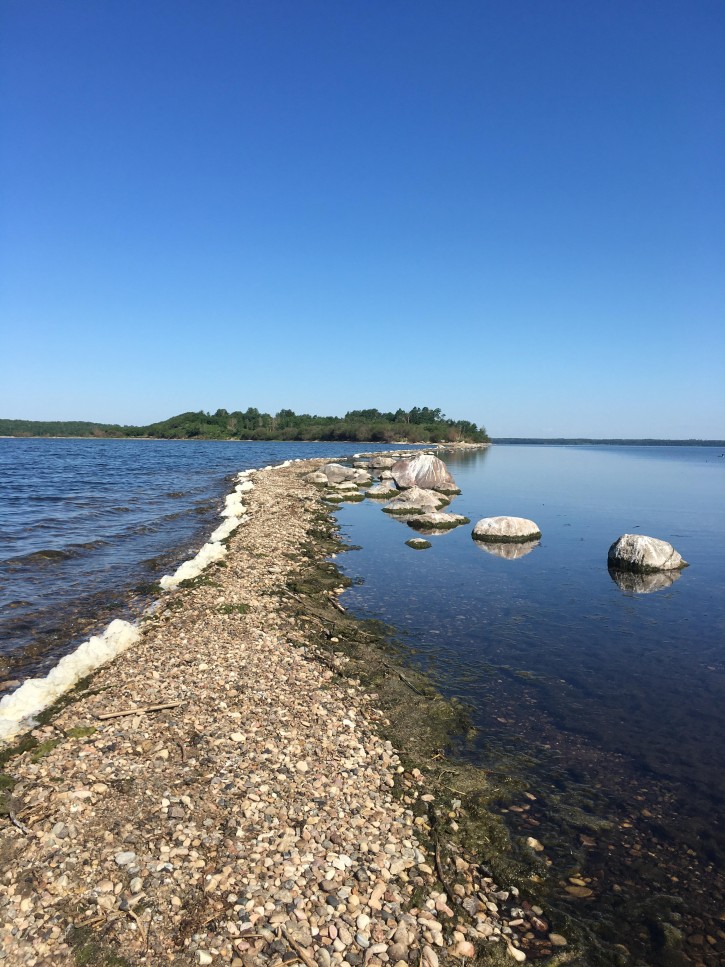 Sunday was a wonderful, clear and hot day. We lingered after breakfast and then packed up for home, but not before christening Denise’s kayak with some champagne. We took the long route, paddling over to Pelican Islands, around Long Point to the south side of Sir Winston Churchill Park, under the causeway and back to the boat launch. 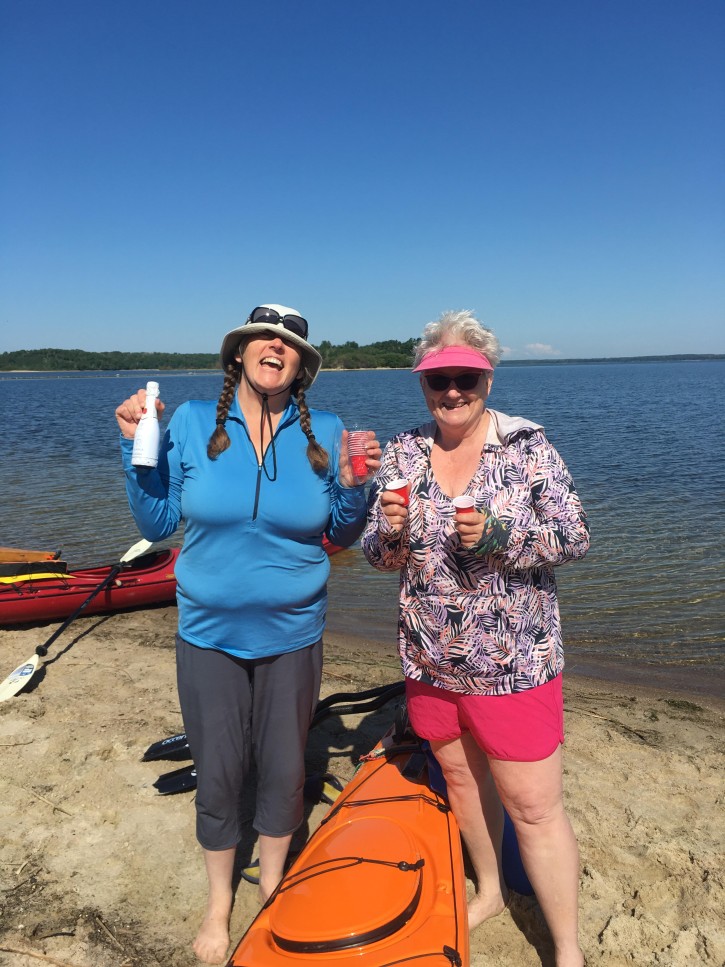 In total, we covered 33 km, about equal amounts each day, some of which involved a bit of zig zagging. There’s so much more to cover in just the east half of the lake: Red Fox Island, Black Fox Island, High Island and the historic Lac La Biche mission. You could spend a week camping and kayaking on the lake. Or make it an annual club trip.

In the end, we found our sandy beach. I’m still digging sand out of my teeth a few days later, but it was well worth it.