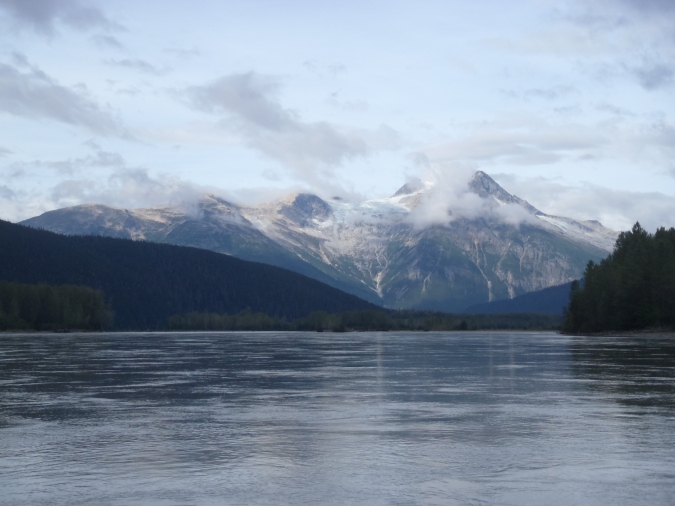 After a Friday night loading of boats and gear at Reg’s house, we departed bright and early Saturday August 10th. We are in 3 vehicles, and towing Frank’s trailer with 3 boats on it. We had many stops during the day, including boat inspection just past Mount Robson, but eventually made it to Vanderhoof where we met up with Ric, who lives in Salmon Arm.

After another early start, we drove and drove. Stopped at Morisburg where they still spear fish from the rocky shores of a waterfall, and stopped at Hazelton to see the Native lodges. 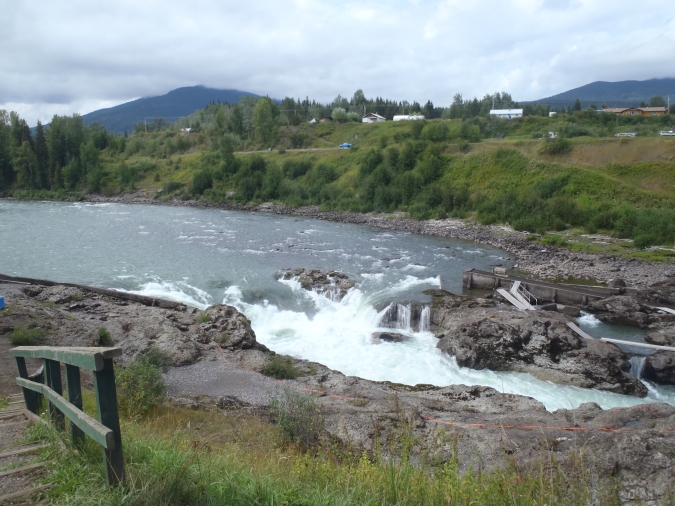 Just past Hazelton we turned north, and kept on driving. I think I saw my first ever “Bear Crossing” sign, and proceeded to see 6 black bears before we stopped to camp at Meziadin Provincial Park. We set up camp and drove to Stewart BC for supper, after finding out that the “The Bus” in Hyder Alaska was closed for the day. Apparently “The Bus” has the best fish and chips ever, but that will have to wait for another trip. These coastal mountains are huge!! And quite lovely!!

Monday Aug 12, and we are still driving. Saw 8 more black bears, I guess that “Bear Crossing” sign really is necessary! Lunch in Dease Lake, from where we will turn west. The road to Telegraph Creek is supposed to be 130 km long and Wikipedia says it will take 4 hours to drive. It did turn out to be some road!! We made it in only 2.5 hours, but the road is scary. Vertical drop offs right by your tires and not a guard rail in sight! 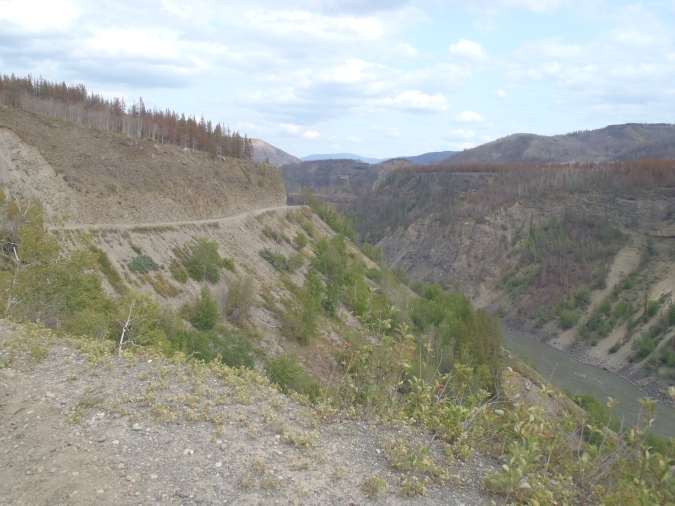 At one point where another creek joins the Stikine, the canyons are deeply incised and the road stays up on the plateau until the plateau comes to a point, where you do a hairpin turn and snake down the side of one of the canyons. After Telegraph Creek, we drove to the end of the road at Glenora, another 30 km of somewhat better road. But we made it and camped in a field where we have the landowner’s permission to leave our vehicles for the week.

Tuesday Aug 13. After the usual pack and repack, we are finally on the Stikine and paddling!! It is wide and very brown, with excellent current. We seem to make 11 – 12 km/h without much effort. The 32.8 km to our campsite at Dokdaon just flew by and we ended up with an early night at a lovely campsite.

Wednesday Aug 14. The weather is still holding, sunny and warm. Another short paddle to our campsite at Donnaker Creek, so even with a morning break, we ate lunch at our campsite. There is not much hiking around here, so we sit and visit. Donna baked a cake. We did see a Momma bear and her 3 cubs from the river this morning, but they hightailed it into cover once Momma figured out what we were. 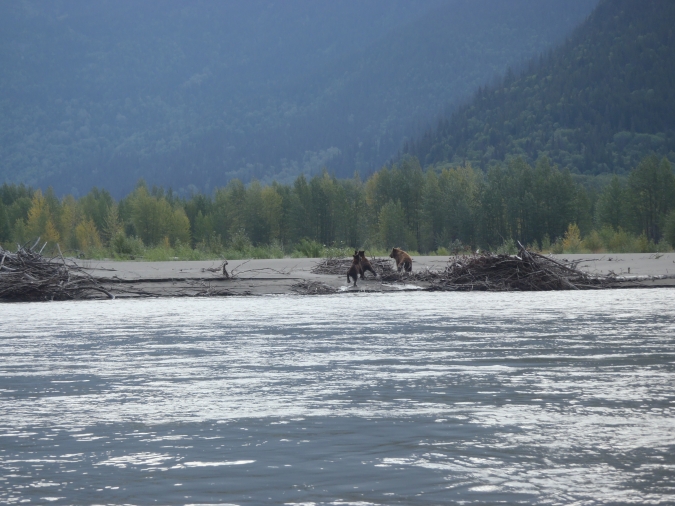 The paddling is easy, we did 3 “canyons” today and all were flat water.

Thursday Aug 15. Grey skies today, and some wind. We paddled through the Flood River Delta, which was a bit of a challenge as it is braided and full of log jams. After scaring off the resident black bear, we camped at a creek and a few of us attempted to hike up to the Flood Glacier. The alders are thick and we could not find any sign of a trail, so we abandoned the attempt after 45 minutes or so. The creek has mini ice bergs in it and would be an excellent beer cooler, if we had any beer….

Friday Aug 16. We were greeted by the resident bear as we loaded the boats in the morning, but he (she?) decided to cross the river and avoid us. Good bear! Our destination is a camp at Mud Glacier, but after some fun paddling through the braided channels of Scatter Ass Flats, we could not find anything resembling a decent camping place. We decided to paddle to the next day’s destination, Great Glacier Provincial Park, which made this our longest day on the water at 56 or so km. With the current, it was a fairly doable day. Our paddles sang most of the day with the hiss of the silt in the Stikine. 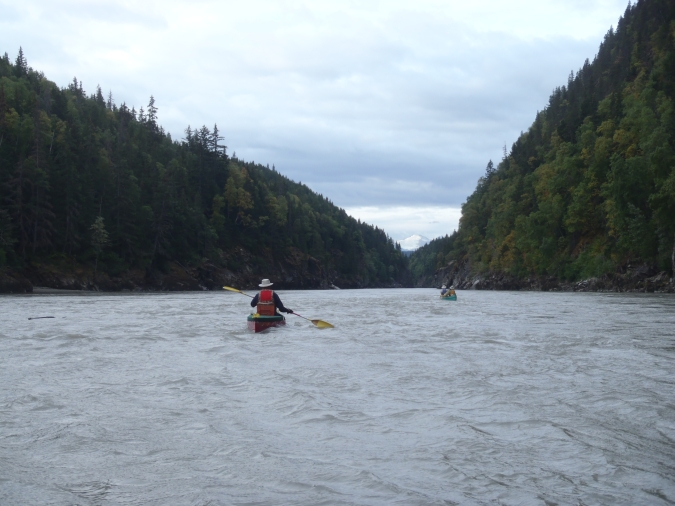 It takes forever to settle and our water filters are showing the strain. The provincial park must be one of the least used parks in BC as it is tricky to land canoes there, and it is pretty far from the nearest road. Still, it was heaven! 4 picnic tables and your choice of roofed or open air toilets! With toilet paper supplied! Outfitters stop there, so the ground was flat and there were lots of good, level tent sites.

Saturday Aug 17. The rain started about 4 am, and lasted until about 4 am. All the mountains and glaciers are hidden in low lying clouds. Since we are already at our destination, this is not the problem it might have been. About 10 we left on a hike up to the Great Glacier. We are hiking through Dr. Seuss trees, the lower dead limbs on most trees have huge balloons of moss on them and are quite wonderful! 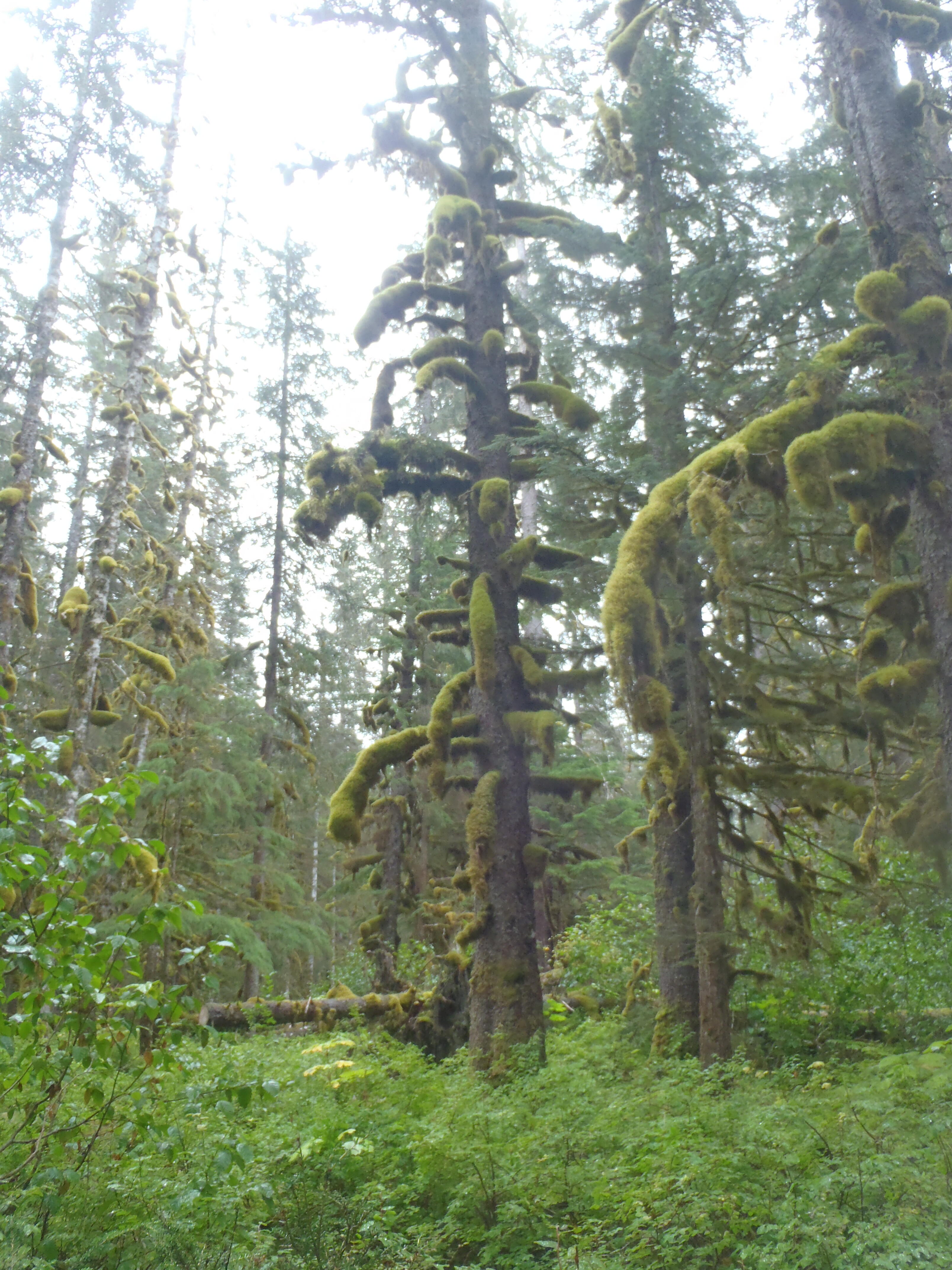 The lake was amazing, full of deep blue Bergy Bits stranded on sand bars. Even through the rain it was an amazing site! We were back at the campground by lunch, and spent the day visiting under the tarps. Most had to move their tents through the day as the level spots were flooding with all the rain. And, ice bergs kept on drifting by… 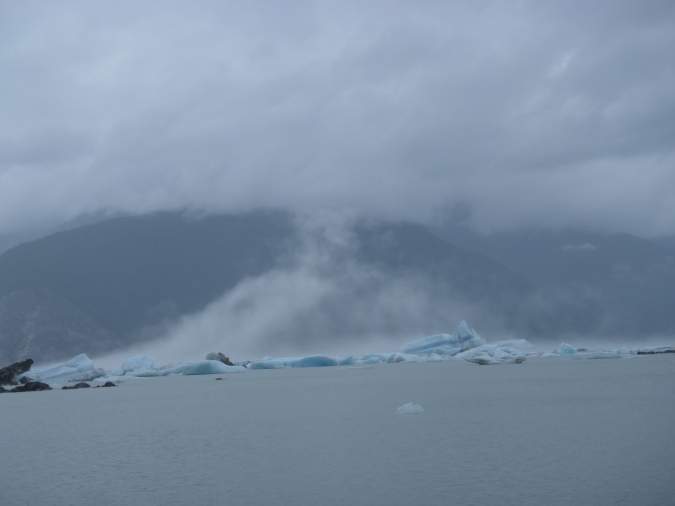 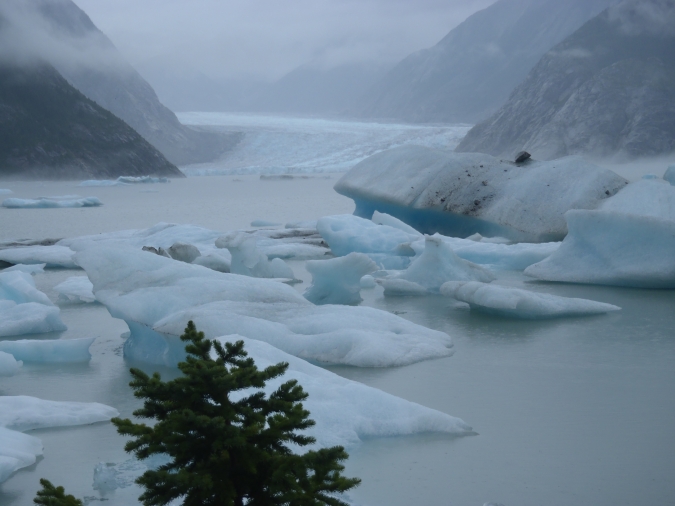 Sunday Aug 18. The rain quit around 4 am so we packed and headed off with the wind. It is much colder than it has been, and the mountains that peek through have new snow up top. We stopped at the fish processing plant, but the salmon run is so low that he was not operating at all. All salmon fishing is catch and release this year. We paddled across the Border cut line and into the US, and stopped at Flemer Cabin which is maintained by the Tongass National Forest. Several of us slept indoors, and 4 hardy souls choose to sleep outside. But, the rain has quit!

Monday Aug 19. Today we paddled up a side channel of the Stikine, the Ketili until we ran out of water. 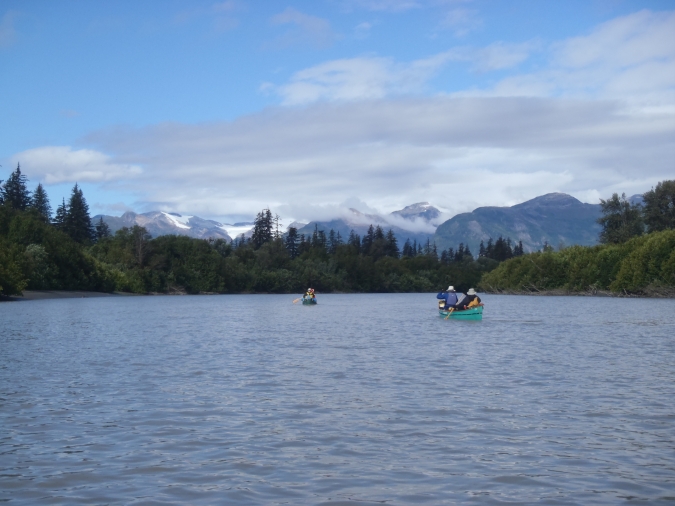 Then we followed a somewhat sketchy path through the trees, and came out at the Chief Shakes Hot Springs. What an amazing find!! Two lovely log buildings, out houses, and an indoor and an outdoor hot tub that were HOT. Absolutely lovely!! There are two hoses, one hot and one cold. You move a hose in or out of the wooden tub to control the water temperature. Very low tech, but it works! 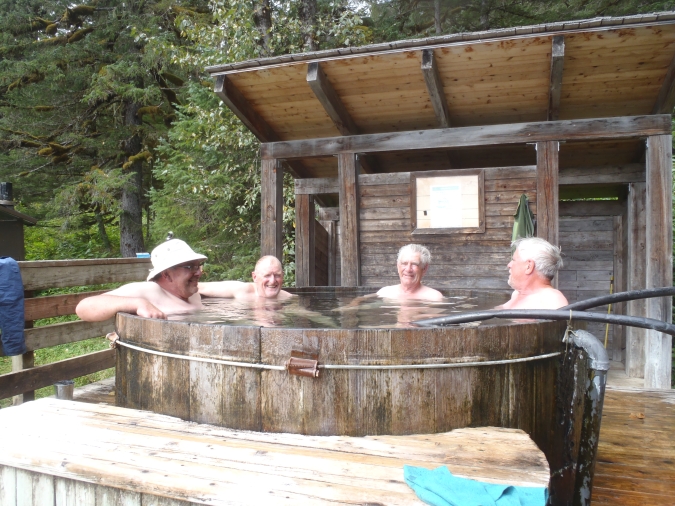 After wading the canoes back down the Ketili (water levels dropped on us), we paddled to the Shakes Slough cabins, which Reg had rented. After a fire, we headed to bed.

Tuesday Aug 20. Solid grey skies and rain again. We were to canoe up to the Chief Shakes Glacier, but the cloud cover was so low, we wouldn’t see anything. About lunch time a guided group stopped to use the toilets, and Eric of Breakaway Tours told us the weather forecast for the next 7 days was solid rain, and offered to return later in the day and run us to Wrangell in his jet boat. After much discussion, we decided to take him up on the offer. After a 1.5 hour jet boat ride, we found ourselves in our hostel in Wrangell, and eating a wonderful meal at the Stikine Hotel.

We missed the last 3 days of paddling, but we also missed an open ocean crossing to Wrangell that had a few of us worried. Future trips might be wise to just book the return jet boat from Shakes Slough. We had had a bet on the river about what the latest Donald Trump issue would be once we hit civilization, but none of us predicted that he would want to buy Greenland. Sigh.

Wednesday Aug 21st, we took the 5.5 hour jet boat ride back to Glenora, and our cars. We were determined to get to Dease Lake, so we tackled the awful road and did end up eating supper in the hotel in Dease Lake. Thursday was back to Vanderhoof where we said goodbye to Ric, and Friday night we were back in Edmonton. Thank you to Reg for planning a wonderful trip to an amazing part of BC!

Oh, and if you ever head to this part of the world, we highly recommend This email address is being protected from spambots. You need JavaScript enabled to view it. Eric owns it and he is just a terrific guy!