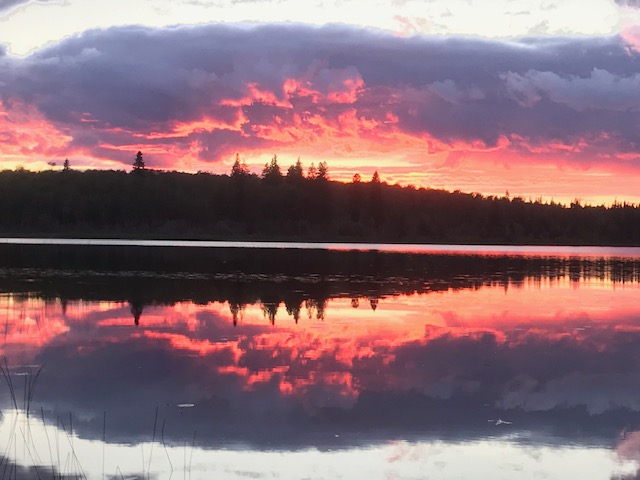 We agreed to meet at the Jackson Lake Staging Area at 12 noon. We left Edmonton at 8:30 am, and its an easy drive north in that time. Lakeland provides carts with large wheels to transport your gear 3.2 km to the water, and 14 of the 15 were at the trailhead! We arrived at the water and got our gear all loaded in our various boats. John and Eleanore had a tandem canoe, and so did Jim but he was paddling solo. Donna had a kayak. The Lakeland circuit starts on a 3 km long channel that by late August is weed and algae chocked, but we found a clear channel. We paddled onto Jackson Lake, and under the bridge into Kinnaird Lake. Our destination was the Island campsites in Kinnaird, which are beautiful. With our mid-week trip we passed a family of 5 paddling out in the channel, and then never saw another person for the next 3 days! Our Kinnaird Lake island was a lovely campsite, and we were off the water fairly early in the day. The loons sang for us, and we had a lovely relaxing evening around the fire.

Tuesday we paddled down Kinnaird Lake and into the channel connecting it to Blackett Lake. We had lunch at a small campsite just inside Blackett, and then checked out a couple of other campsites on Blackett. They are accessible by ATV, and looked well used. We paddled north then into Blackett Lake and camped on one of the Blackett Island West islands. It was another lovely campsite, and not nearly as well used as the ones on Kinnaird Island or Blackett south. 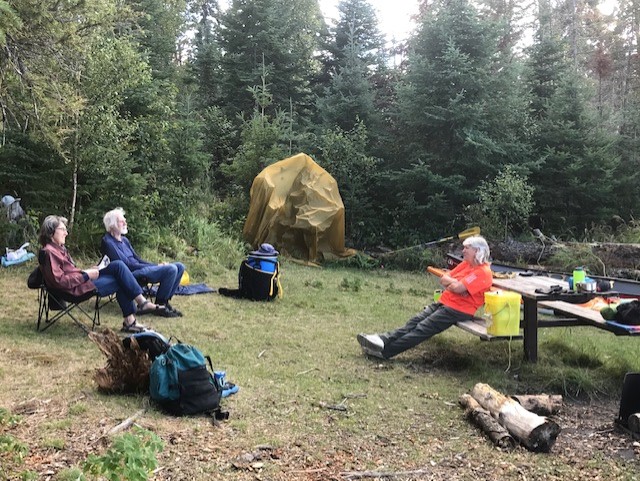 This spot had resident Kingfishers, who seemed to be in some sort of battle with each other. We were also entertained by the beavers swimming by, and the pelicans, and the gigantic dragon flies, who kindly ate the mosquitoes for us. We had a lovely fire and the most glorious sunset and beautiful stars that night! 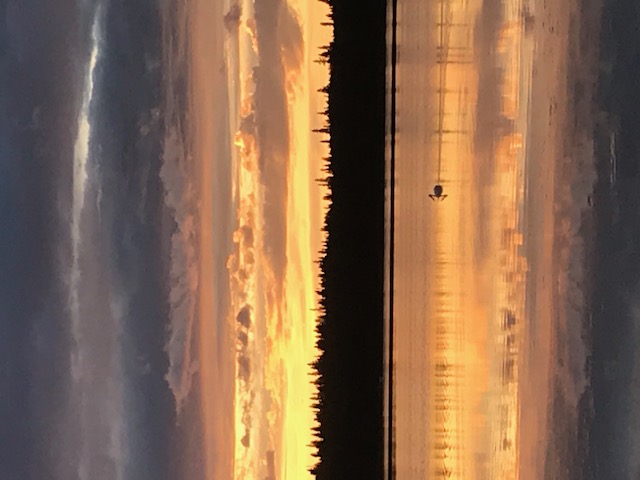 There are 2 portages off Blackett Lake, a 0.6 km one back into Kinnaird Lake (which Donna had done before), and at the north end a 1.6 km portage into McGuffin Lake. We wanted to do the “real” circuit, so we headed for the longer one to McGuffin Lake. It is not well maintained. There were 3 trees down across the path, which John cut and moved 2 of them, but the third was just too big. There were carts there, but only one at either end, and carts don’t do well with trees across the path anyway. There is a lot of boardwalk, but the boards are spaced in such a way that the cart tires can easily fall between the boards, and lifting a heavily laden cart back out of the crack was a whole new experience! Parts of the path are very muddy and the tree roots are just plain evil! We certainly earned our bruises! The water is very high this year and the docks at either end were partly swamped, but a welcome sight none-the-less! The portage occupied nearly 4 hours out of our day, thankfully the paddles on either end were only about 3 km each. McGuffin is a lovely lake, it seemed much more isolated than the others. It has a snowmobile trail that runs along its west side, and we walked part of the trail up to a memorial cairn for Charles McGuffin, for whom the lake is named. Jim and John did a bit of clearing around the cairn and it was a lovely view point. The campsite on McGuffin was recently mowed, so they do a bit more maintenance because of the trail. All of our campsites had green thrones, fire pits, picnic tables and bear poles. 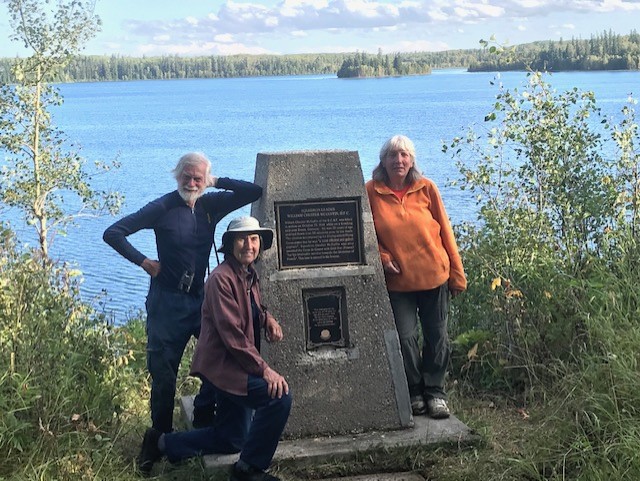 From McGuffin, there is a short 400 m portage to Jackson Lake, which did not have any carts, but we managed it in record time! It is in very good shape and was a real treat after the other one! We paddled through 3 small lakes, which seemed prime moose territory but alas we did not see any moose. We then headed to Jackson Lake Peninsula campsite for lunch, and then had a 1.5 km paddle across Jackson Lake, which can be quite windy. The wind was getting up, but we managed to hit the channel without any problems. In the channel we met a group of 4 people paddling in, the first people we’d seen the entire time. Many of the carts had migrated to the water end, so we had no problems getting carts, and portaging back to our cars.

We were back quite early, 2 pm, but the thunder we could hear certainly kept us moving. The storm broke just as we were tying on our last ropes, and what a storm! The dips in the road driving out were full of water, the gravel turned to grease, and the rain and then hail pounded us hard! We were all so happy to be off the water and in our nice dry cars! We had barely had a drop of rain all trip, and then that! We drove into Lac La Biche, to see if we could get updated maps of the circuit (mine is from 2008). The answer was no, they don’t print those maps any more. Darn! But we found ice cream, so the trip had a happy ending! And we were back in Edmonton by 7pm.