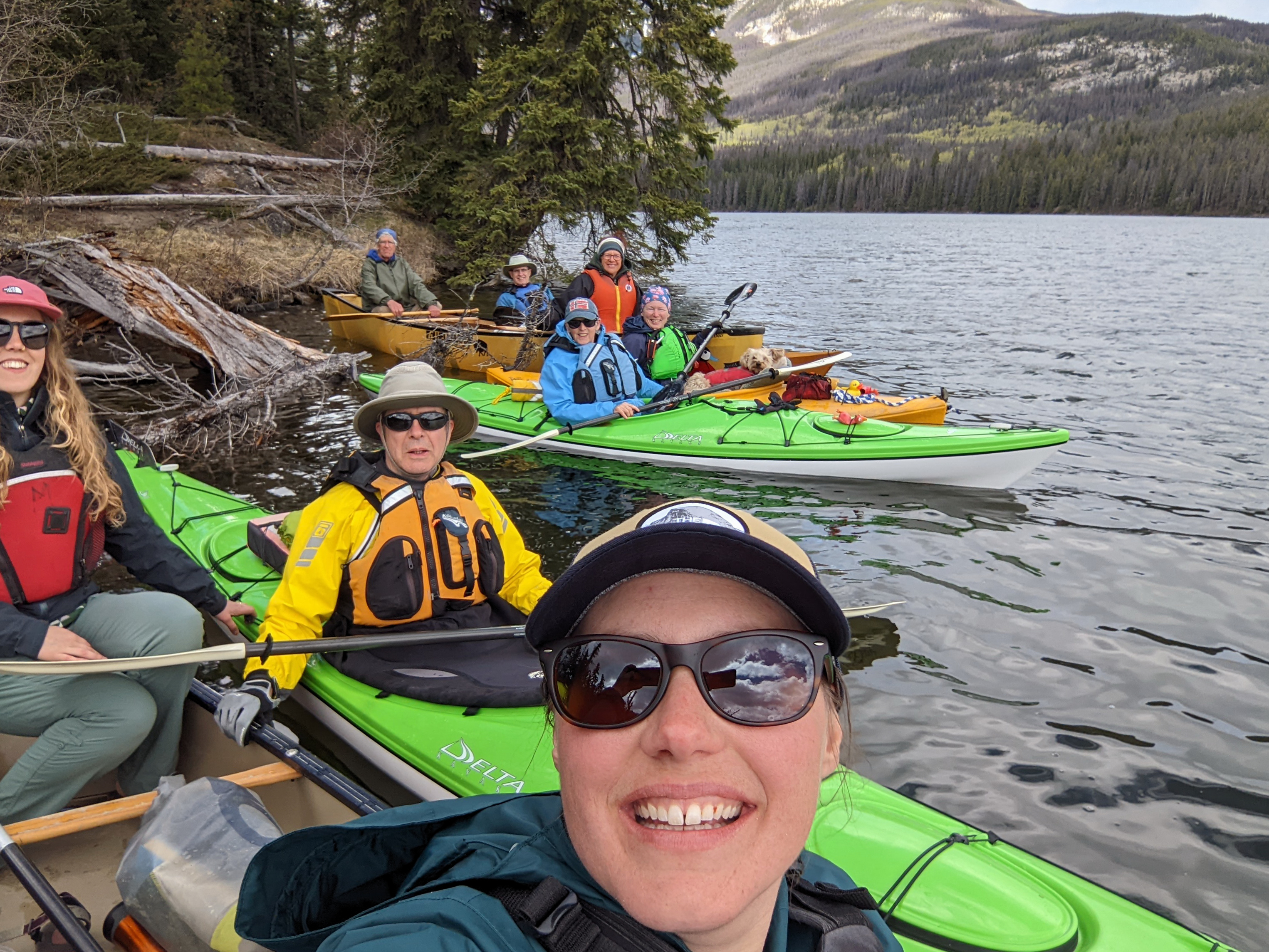 This was the first day of the 2022 NWV Jasper Weekend. We were camped, and in some cases glamped, at Whirlpool Group Campground, which is 25 km south of Jasper on Highway 93A. Our aim was to paddle on Maligne Lake, but it was still frozen due to the cool spring weather. We left Whirlpool Campground for Pyramid Lake; the clouds looked as if it might rain. We launched at Main Beach, which is on the south west corner of the lake. We were Frank, Siobhan (with Barkley), Cathy and Paul B. in kayaks, with Gill and Sara, also Alan and Donna G. in two canoes. 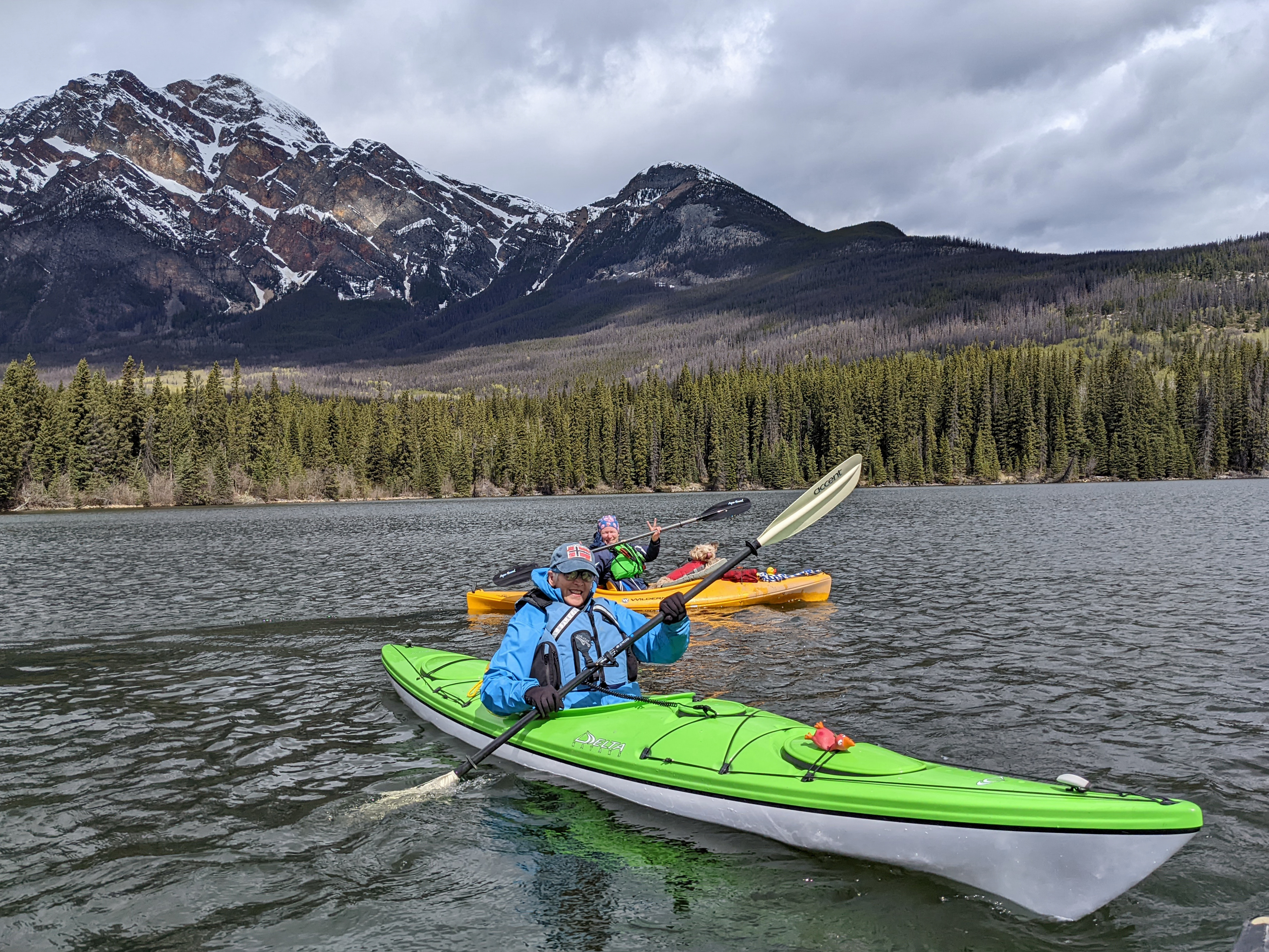 There was some wind coming from the west. We paddled clockwise around the lake from the sandy beach, with the wind picking up a bit. Light rain started as we landed at a sandy beach located in the northeast part of the lake; by now we had paddled for 38 minutes. 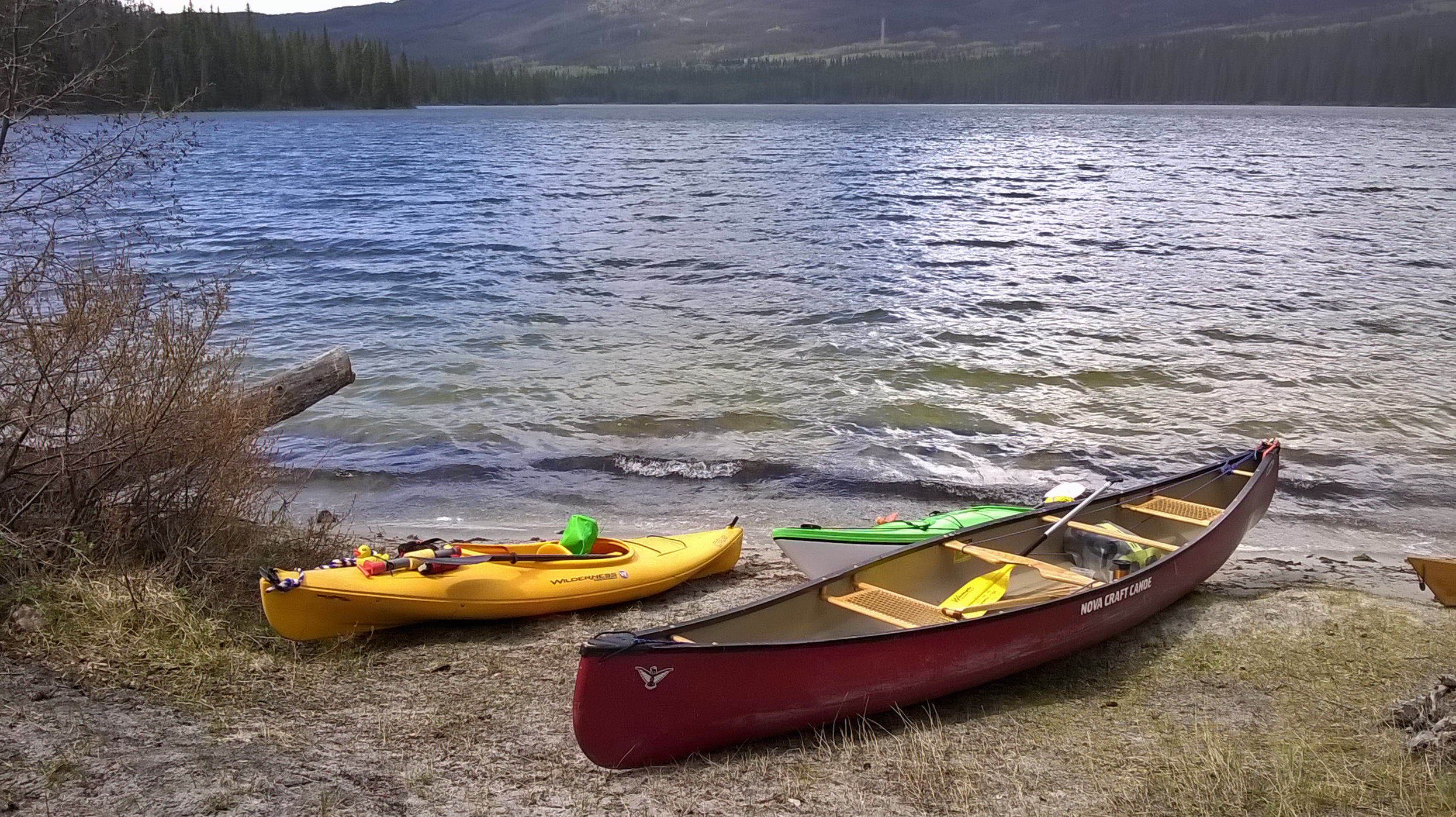 The beach has a gentle slope of sand which is an easy place to land and can easily accommodate several boats. The rain intensified and we gathered under a couple of trees, the wind was now stronger and some hail fell. 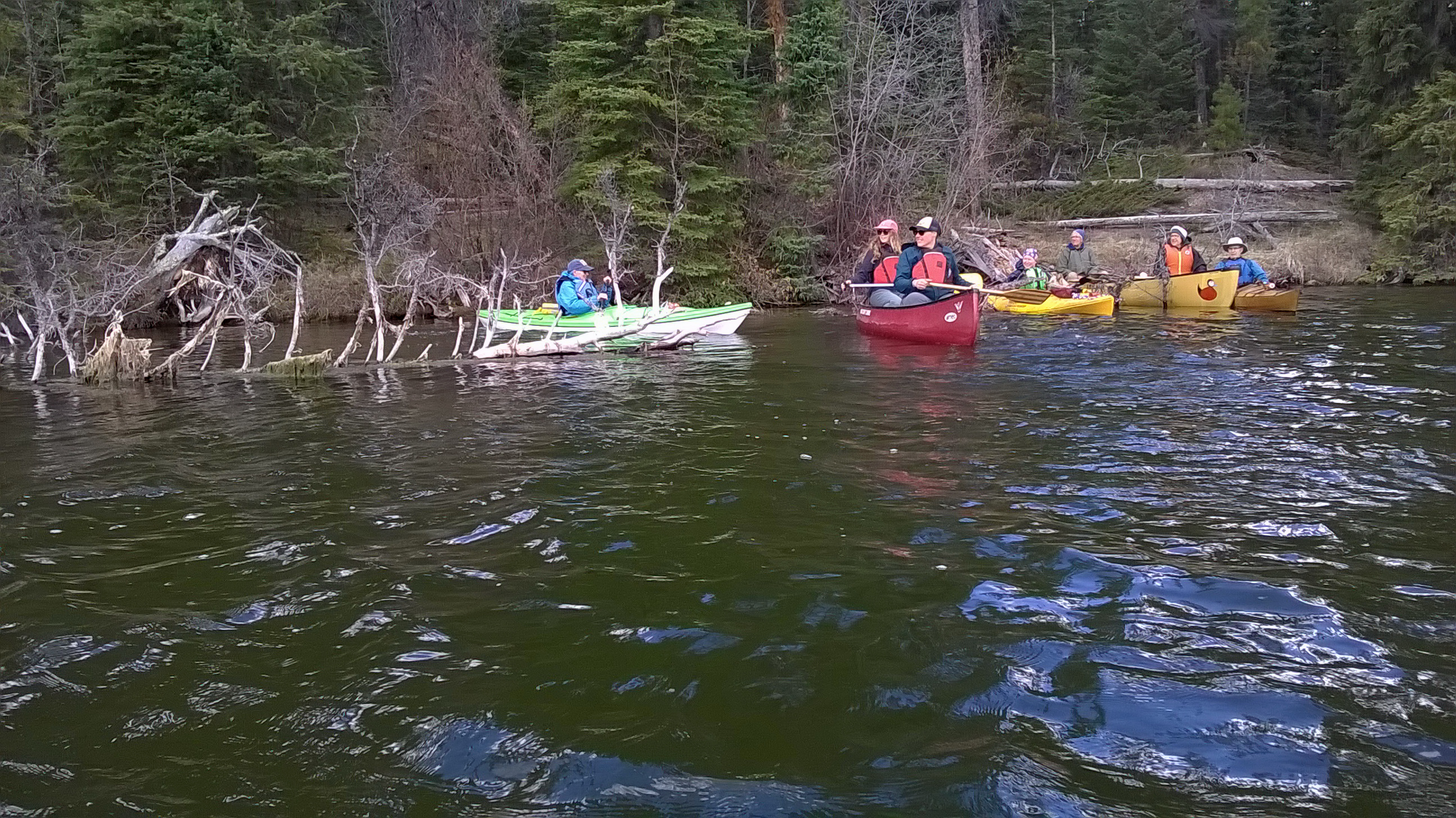 The trees helped shelter us from the weather and enjoy our lunch. The mood of the group was surprisingly good considering the conditions.  After 40 minutes we launched again in much better conditions, continuing our clockwise direction. A pair of bald eagles glided above us. There is a bay at the most northerly part of the lake, here we ran into a couple of loons. We then followed the eastern shore of the lake and made our way to the bridge over to the island. Frank, Gill and Sara performed the limbo under the bridge. 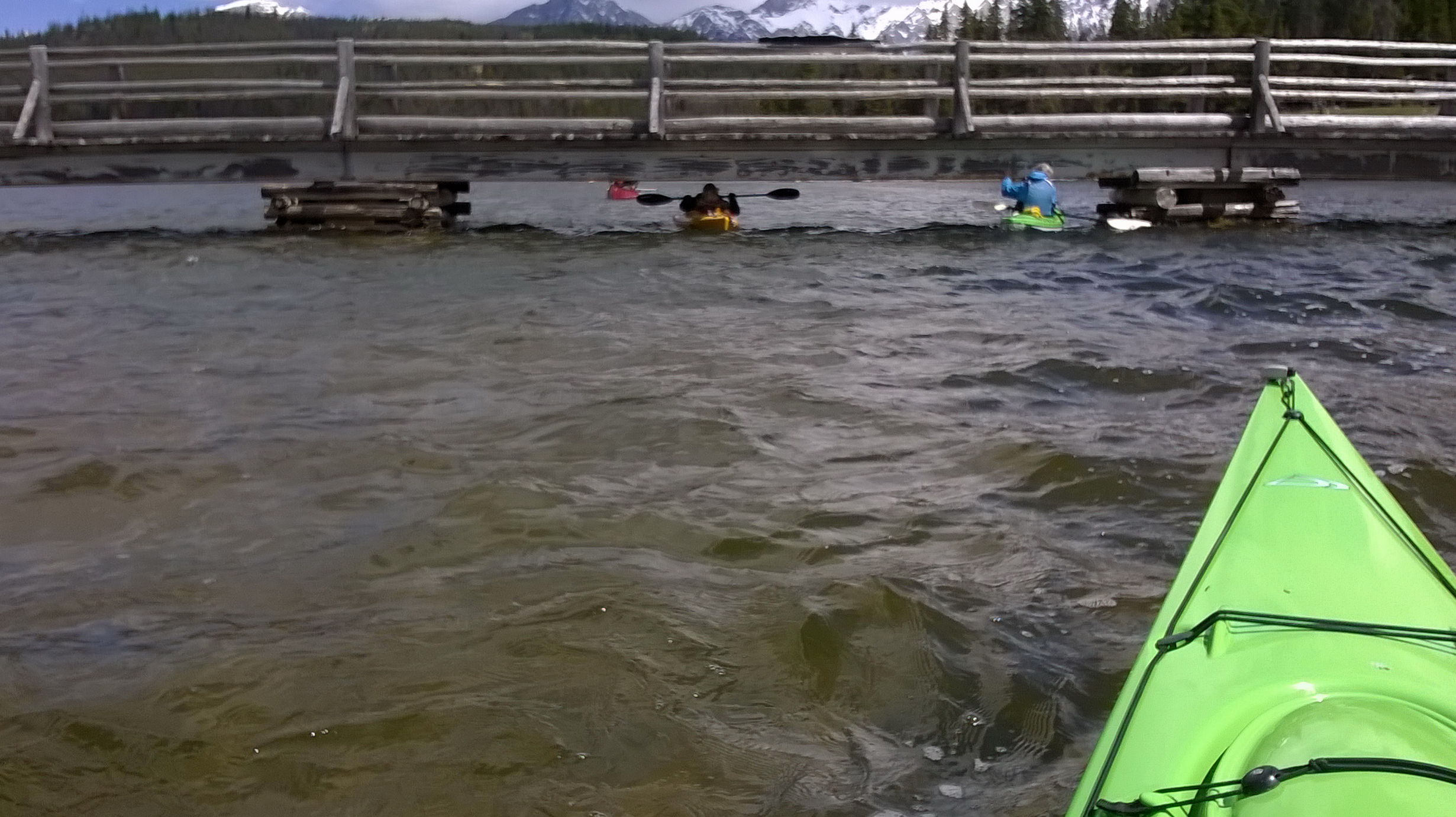 The rest of us paddled around the island and were met by Frank, Gill and Sara coming the other way. They wanted to go under the bridge again, which they did, some of us tried to get photos and videos with varying degrees of success. At this point the dark rain clouds from the west were gathering and the wind was making the lake a bit choppy, we decided to head for the take out and travelled directly into the wind and waves. The rain held off and we landed on Main Beach. It was a short paddle of 110 minutes and we covered about 7.7 km.