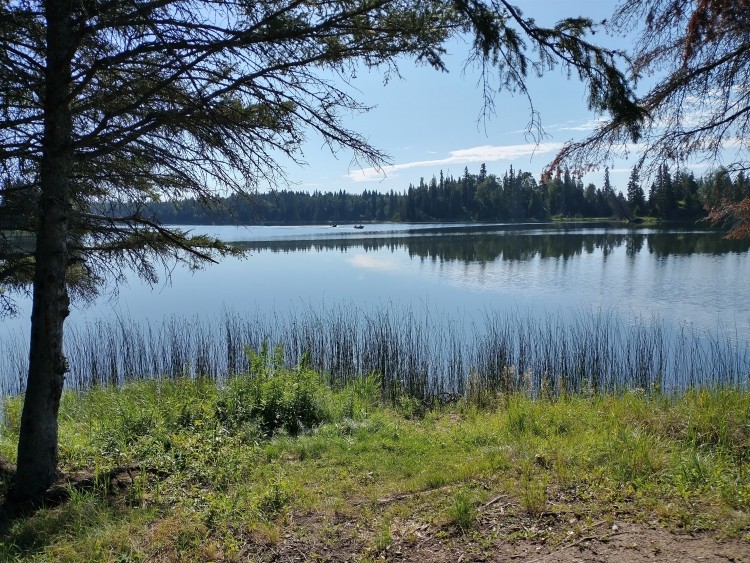 I had always wanted to do the Lakeland Canoe Circuit, so when it came up on the trip schedule this year, I signed up early.

Lakeland Provincial Park is a gem of backcountry paddling about 20 km ENE of Lac la Biche. Ostensibly, the Jackson Lake Staging Area is along “Highway” 663, but the dusty gravel road and washboard would have you thinking otherwise. Nonetheless, it’s a pretty easy 3.5-hr drive from Edmonton on a Tuesday summer morning.

We had planned to meet at the staging area at 9 AM, but the last 20 km slowed us down a bit (Delay 1). “We” in this case were Brenda (our leader) and Paul in tandem canoe, and me (Frank) in kayak. The plan was to load our canoe and kayak onto the carts that are supplied by the Park and portage 3.2 km along the trail to Jackson Lake. Except that all the useable carts were at the other end of the trail, so we had to hike 3.2 km to fetch them, 3.2 km back to the parking lot, and 3.2 km with loaded boats to the lake (Delay 2). Owing to the hot day (about 25 C), time for lunch and breaks along the portage trail, and gearing up, we didn’t wet our paddles until about 4:30 PM. 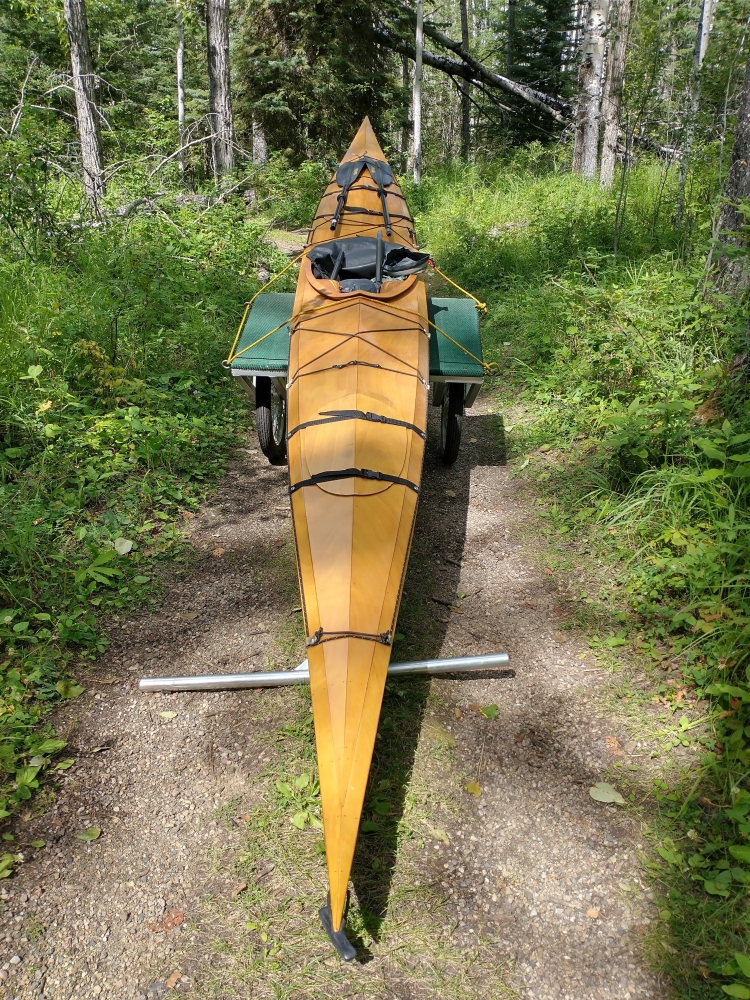 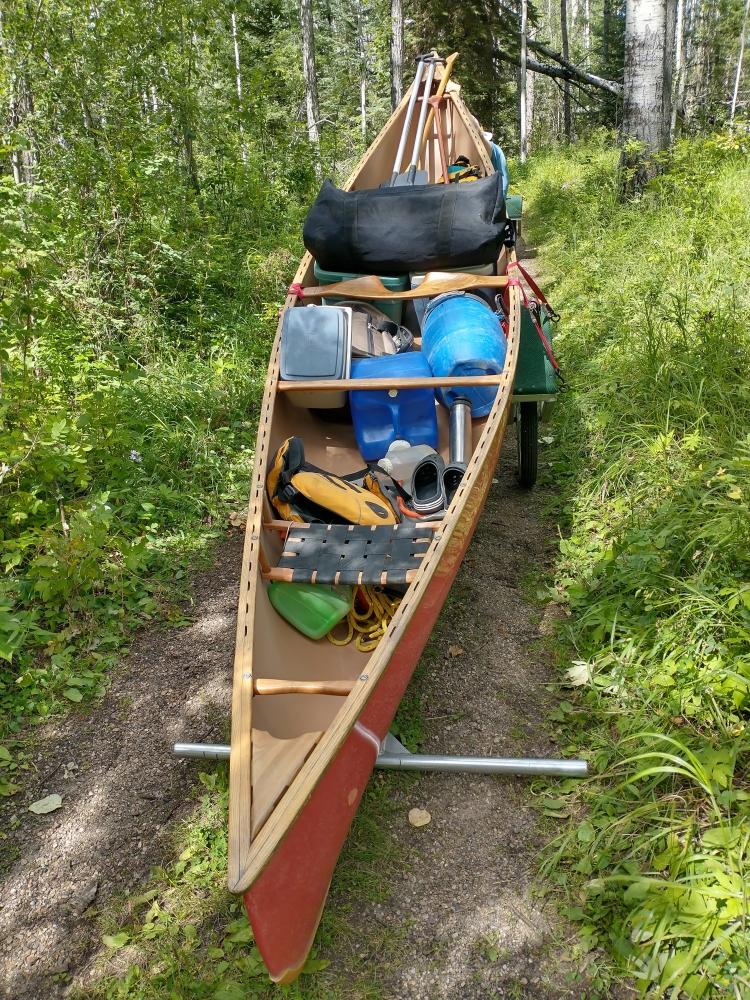 The portage trail is very good and well maintained. On our hike in, we met a maintenance crew of two who had just used their chain saw to remove a fallen tree along the trail. At Jackson Lake, the boardwalk and dock make launching pretty easy, although the platform could use a bit of repair.

The first part of the lake is a 2-km narrow bay of pondweeds that is clearly an infilling of an old stream that was dammed by beavers generations ago, with scraggly flooded spruce being about the only nearby trees. After more than half an hour of paddling, we came to the main part of Jackson Lake and easily scooted along the NE shore to where it enters Kinnaird Lake under an old footbridge. The water was shallow under the bridge, with only the kayaker getting through without wet feet. 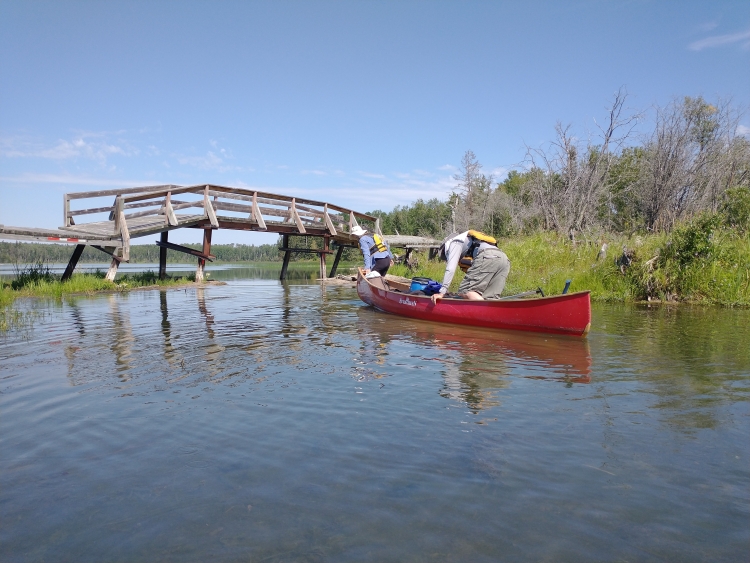 From the bridge, we paddled directly to the islands about 2 km south. There are lots of campsites to be had there at “Kinnaird Central”— two on the main island, one on a small island to the west, one on a peninsula to the south and one along the mainland to the east. 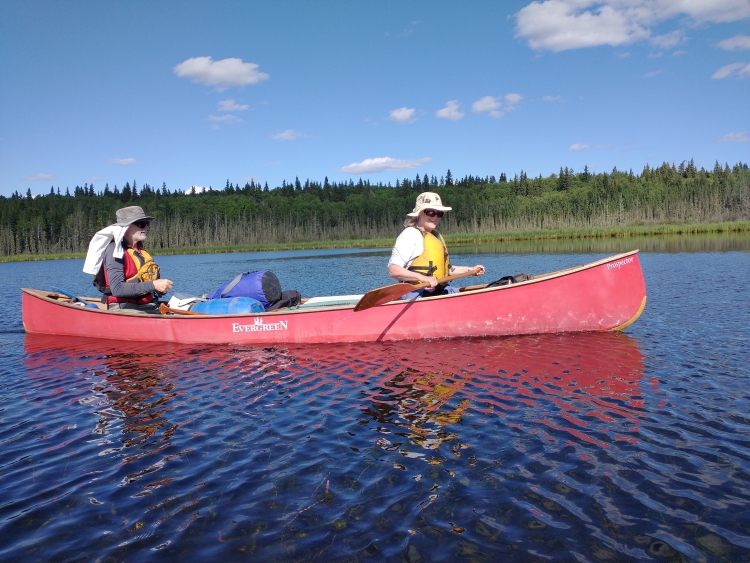 Each one has a fire pit, bear-proof food storage and a green throne, with room for a few tents at each site. 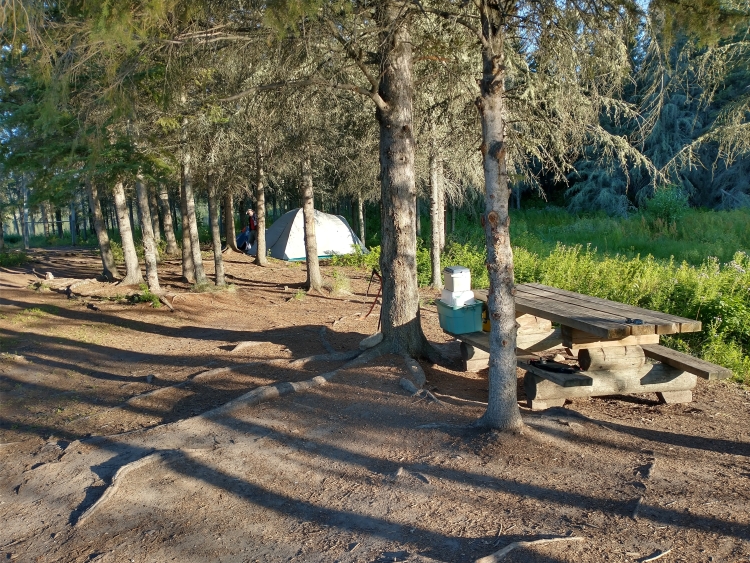 We set up two tents at a fairly large site on the SE tip of the main island, where we found several articles of clothing and other items strewn around, but no tents. As we had worked up quite a sweat during our triple portage and it happened to be my birthday, I went for a dip in the lake in my birthday suit. (No pics.)

After we set up camp, the owners of the miscellaneous items showed up in a 16-ft aluminum boat with a 40-hp motor. A family of four from Waskatenau, they had been fishing down the lake and were just using our site for landing their gear. We were happy when they built a fire from wood they had brought, before cooking up a mess of walleye in the dark and readily sharing it with us. Yum! They were soon off to their campsite on Jackson Lake near the bridge.

The second day, we crossed over to the east side to chat with a couple who had camped there with their dog, then we hugged the east shore as we made our way south in a headwind. We stopped at two other campsites along the lake (one occupied but empty of people at the time) before finding the channel that connects Kinnaird to Blackett. We paddled as far as the first campsite on the peninsula of Blackett and then returned to our original campsite. Coming back along Kinnaird, the earlier headwind became a tailwind that created some gnarly following seas. Combined with the heat that was close to 30, that made for difficult paddling, so I was some glad to smash onto the windy shore of the peninsula near our island. A camper there helped me pick up my kayak and scoot over to the lee side, where I relaunched for the final 5-minute paddle to our camp, arriving when the others did in their canoe.

We were told that the loons would wake us in the mornings, but it was during the night of the second day that they were most active with their sonorous calls. Probably it was because the sky was clear with the light of a full moon one day away. Au clair de la lune! 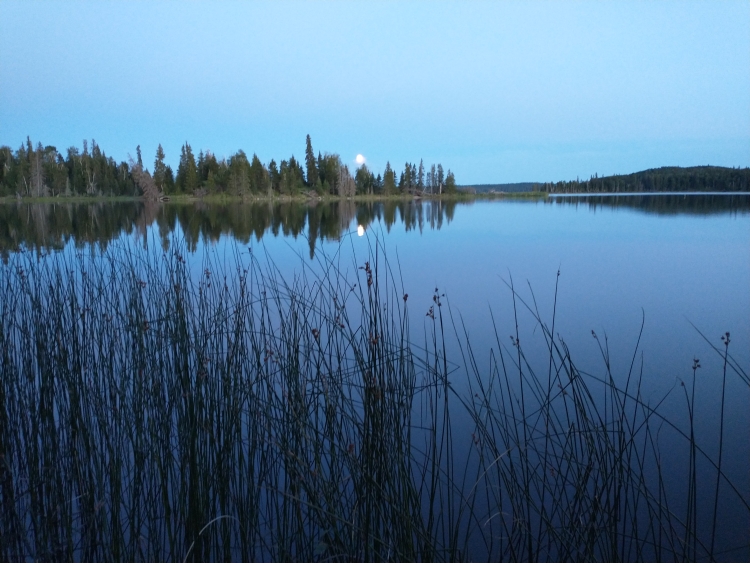 On the third day, we pulled camp and paddled to a couple of other sites on Kinnaird to check them out and talk to other people before paddling to the beaver ponds off the south bay of Jackson Lake. Although choked with pondweeds, the ponds were easy to paddle as we made our way to the portage into McGuffin Lake. 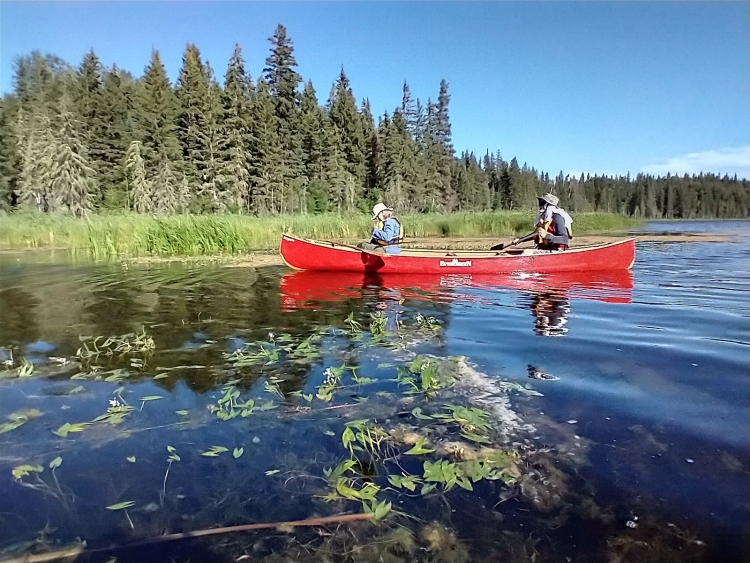 We hiked the 400-m portage trail to find that the McGuffin end was very slimy with blue-green algae. Our return was pretty quick across Jackson Lake and up the long bay to the home trail where, fortunately, we found some free carts. By then, we had packed a lot of adventure into three days! 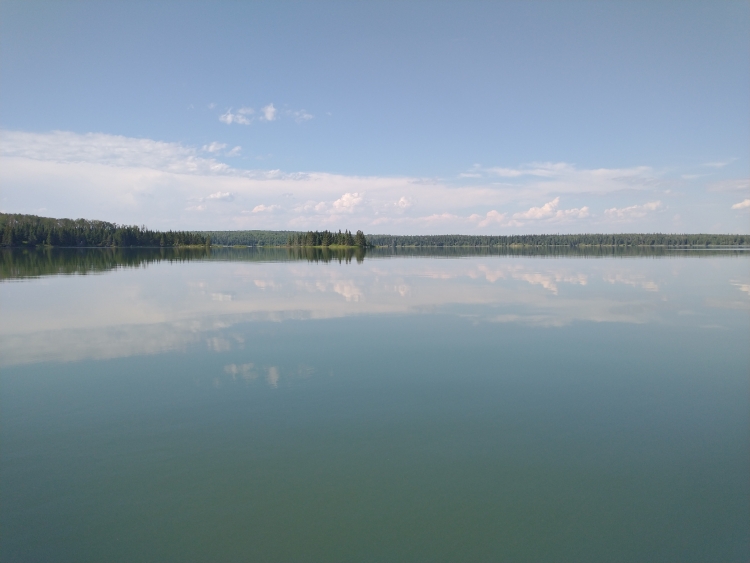 Perhaps because of the hot weather, I never used insect repellent once. Nor did I use bear spray or people repellent. Indeed, all the people along the trip were part of the charm. I would do the trip again. In fact, after eight days, I went back to kayak it solo for five days. But, that’s another story.